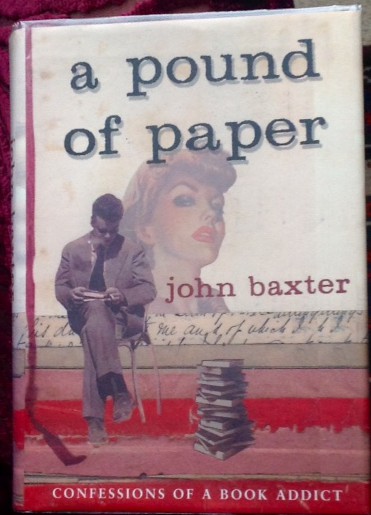 A Pound Of Paper by John Baxter

When this book first came out in 2002 I sat and read it a virtually a single sitting. I’d never heard of John Baxter but what he had to say about being a book collecting addict spoke straight to me. Periodically I go back to it, intending to just read a portion and find myself reading from cover to cover.

Baxter is one of those ex-pat Australians who – like Clive James, Barry Humphries or Robert Hughes – seem to have an irrepressible urge to conquer the cultural empires of the West just by the exercise of sheer will and an insatiable curiosity. Growing up in the relative isolation of 1950s Australia, Baxter became transfixed by collecting science fiction and watching movies. It became obvious to him that his first job as a railway clerk would not satisfy him for long and it was inevitable that he would eventually book passage for Europe.

In this book he gives us an outline of his remarkable career as a writer, broadcaster, film maker and academic - spending time in Britain, USA and France, where he has lived with his film-maker wife Dominique Montel since 1989. All of which is entertaining enough but, for me at least, the most interesting parts of the narrative are his ruminations on his passion for book collecting – and, on occasions, for book dealing.

Baxter is a man of near obsessive passions when it comes to collecting. First it was science fiction and the, then neglected, world of sci-fi ‘comics’ – the weekly or monthly cheaply printed papers in which many of the great science fiction writers were first published. Baxter does rightly point out, however, that the great writers were few and far between compared to the mountains of useless junk that also got published.

Then came his desire to collect everything Graham Greene – something that not only led him to meetings with the great man but which also provided him with an introduction to the slightly grubby underbelly of the book runner and the book scout. This was a time when the book scout was an almost legendary figure – Martin Stone, Iain Sinclair and Driff Field all make Baxter’s acquaintance during these years. Stone even becomes an erstwhile business partner in an amusing episode involving  the purchase of a houseful of books they have to shift in a Fiat car.

Baxter also gives us a glimpse into the world of the BBC radio arts critic when he gets a role on the magazine programme Kaleidoscope. I’ve often wondered whether interviewing all the great names of the book and arts world would mean that you could get some privileged access to building a library of signed first editions and this shows me the reality – yes, you do! Damn him.

The world of book collecting can take you to some unexpected places. It’s not only book scouts like Martin Stone who are mad, bad and dangerous to know, Baxter’s tales of time spent with Kingsley Amis are also telling – I can’t help but feel that Amis was an utter shit and when he was drunk he was an even utterer shit and I would have hated to have to be in proximity. Baxter, however, got his rewards for spending so much time with the hung-over Amis – he walked away with a signed and annotated script of a Bond movie to add to his collection.

I will no doubt go back to this book again eventually – I always do – and once again I will find something new in it. If you have the book collecting bug, this book is something you will love written by someone who understands you.