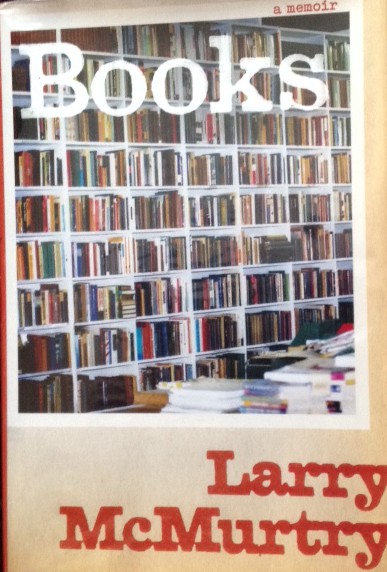 I suspect that most people will only know Larry McMurtry as a novelist and screen-writer. His early novel, Horseman, Pass By, was turned into the movie Hud which starred Paul Newman and his later Lonesome Dove trilogy was turned into a successful television mini-drama. He was also the author of one of my personal favourite books The Last Picture Show, as well as Terms of Endearment and the richly comic Cadilack Jack.

What is less well known about McMurtry is that he is one of the USA's premier second hand book dealers and this is what this particular memoir focusses on. His approach to this is refeshingly brisk - he keeps a clear eye on the fact that the reader is likely to be most interested in the book selling and collecting than in embroidery around his life as a novelist and script-writer. The chapters are short and pithy and reading it feels like you're sitting down with him as he grazes over his life in the rare book world - he doesn't linger on unnecessary detail but also never loses his humour and tone of wry reflection.

McMurtry stumbled into book collecting and dealing, starting small with casual book scouting - trawling around book and charity shops looking for unrecognised bargains that he could sell on quickly for profit. Gradually his knowledge and his commitment to the trade grew and he found himself buying and selling for himself and other people on a pretty substantial scale.

McMurtry certainly belongs to the pre-internet era and he's generally dismissive of the book world now. He belongs to a time when trawling shops and meeting extraordinary characters was a key part of the book business and there is a valedictory tone in his memories of that period. This is a man who collects reference books about books and who has memorised variations in first edition print runs and jackets to such an extent that he's still able to bring them to mind well after they are really of any use.

McMurtry grew his interest to such an extent that his shop in Archer City, Texas, called Booked Up became the  biggest used bookstore in America and at its peak it housed close to half a million books. However, his health has never been the best and he had a triple by-pass heart operation which made him reassess his life and career. In 2012 he finally decided that at the age of 76 it would be wise to scale down his inventory and the single biggest book sale/auction was held to dispose of much of the stock of Booked Up.

In many ways this genial book is a nostalgic read for anyone who has frequented second hand bookshops or has harboured a desire to work in that world. McMurtry makes it sound so damn easy and you're left wondering how anyone could be so lucky to be in the right place at the right time and why so many seemingly random people roll up to his door with such remarkable bargains. It's not really like that of course. Although he down-plays his celebrity in terms of his reputation as a writer, it simply must be the case that many of the people he met and much of what came his way happened as a result of his networks and his success seems less serendipitous when viewed through that prism.

The book will occupy you perfectly well for a couple of afternoons and if you love books I suspect you might even read it more than once.