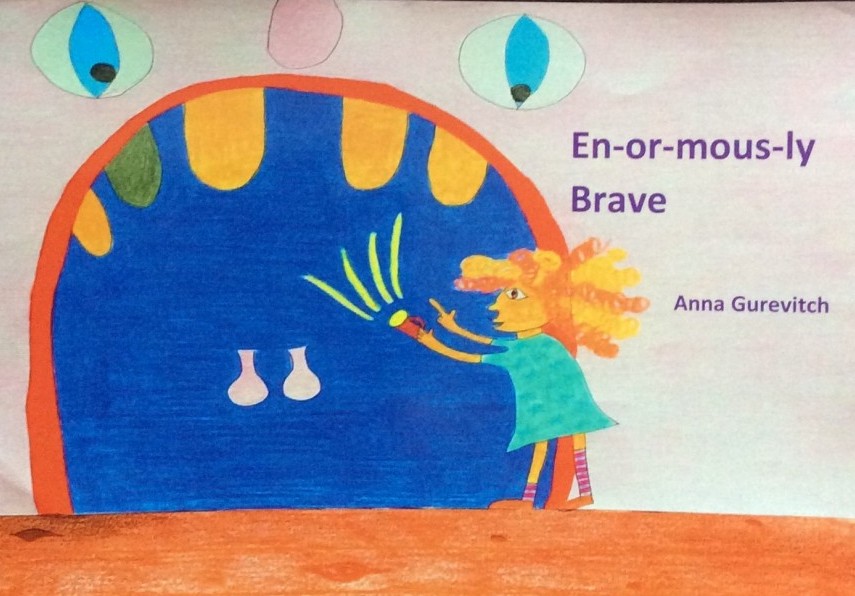 As I very much enjoyed the first unusual book by this imaginative author/ illustrator, I was keen to see the next one. Her distinctive, surreal style of illustration is evident from the cover which shows a girl shining her torch into rather alarming cavernous mouth. Could it be an entrance or something stranger, I think that the detail of pink tonsils suspended in mid- air made me wonder.

The rhyming story explores the relationship between an evidently brave girl and her gentle older brother - a dynamic which is even now rarely covered in children’s books. In fact I can’t bring to mind any fictional siblings that don’t conform to the stereotype of a more assertive boy.

The girl isn’t the slightest bit interested in her appearance or bothered about keeping her room tidy. She is a doer who spends her time talking to giants, swimming with the monster, Loch Nessy and is ‘not scared of ghosts or grandad’s grave’. She has a fierce appetite for life that includes eating ‘raw lemons and anything zesty’ and is clearly an adventurous extrovert:

‘She can raise her voice like a giant wave

Whilst her big brother admires her greatly – he is a bit concerned about her general loudness and lack of gentility. After all, who doesn’t object to someone who noisily gobbles their food and never moderates her voice? He is much tidier and more restrained, although he also enjoys climbing trees, painting his nails and looking after flowers and snails.

Together they form a good team who enjoy each other’s company and sharing stories with friends. I can’t help thinking that I would much prefer the company of the brother as the girl sounds pretty exhausting to spend much time with, rather like my own sister actually!

It is the vivid illustrations that make this story really special – there is so much to look at and comment on. Why for instance does the crescent moon have such sharp jagged teeth? I am looking forward to giving it to my six year old granddaughter to see her reaction. I am sure it will inspire some very curious and colourful drawings and plenty of interesting discussion about different personalities.