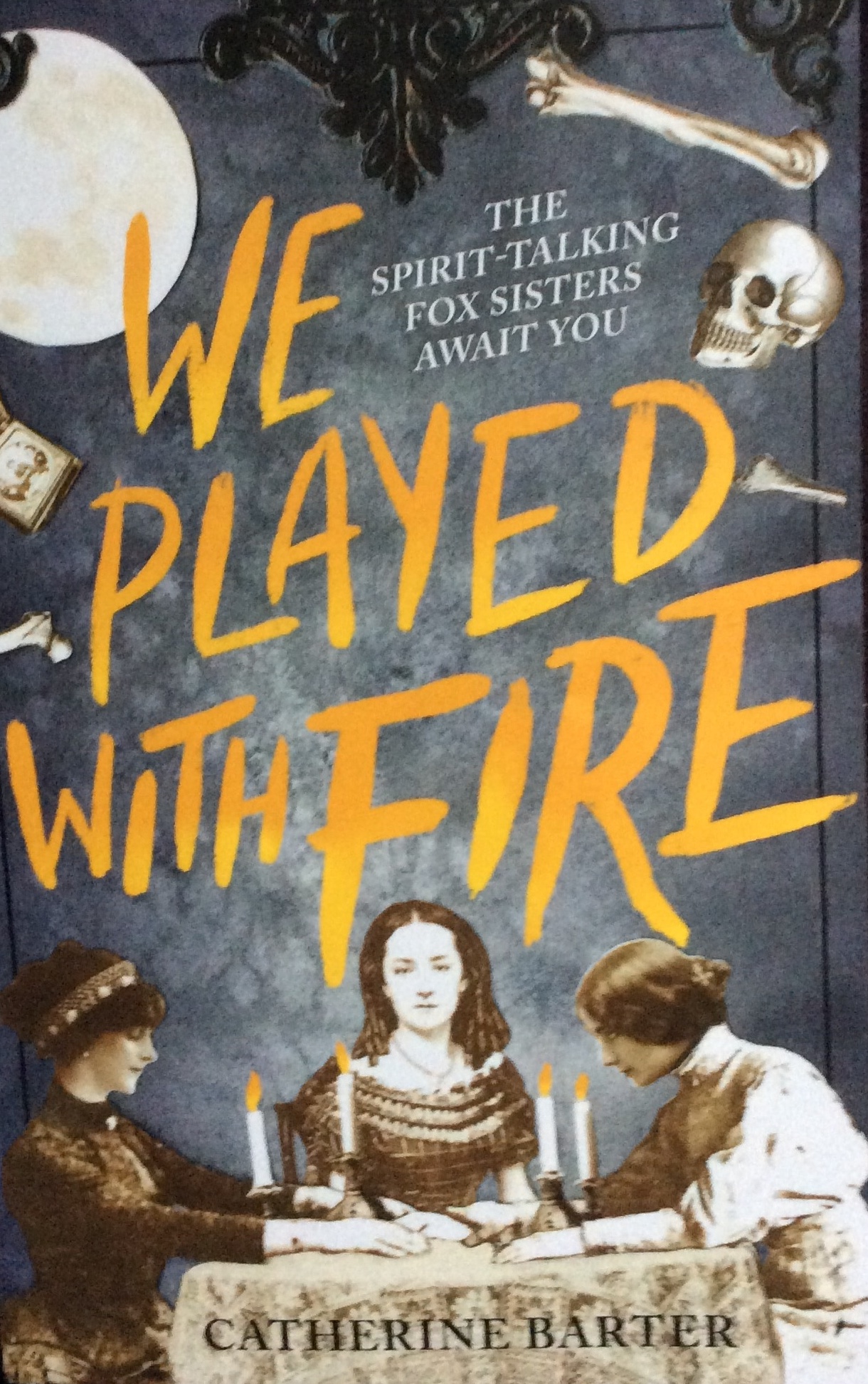 We Played with Fire by Catherine Barter

This captivating Young Adult novel was inspired by the true story of the Fox sisters who claimed to be able to speak with the spirits of the dead.  I was lucky to attend its virtual launch recently where Catherine Barter was interviewed at length by her friend and colleague, Fen Coles. I found that this rather framed my own reading in terms of the many themes within the story which have clear links to the emerging radical ideas of the mid-nineteenth century.

But these are very much the background to what is an engaging coming-of-age story. Maggie is a young teenager living in Rochester, USA who experiences a terrifying event resulting in a little girl breaking both her arms in a fall. Who caused it to happen? The view seems to be that, for some reason, Maggie had pushed the girl down a flight of steps, but she is convinced that someone or something other worldly was responsible. Her family decides to escape the resulting scandal by moving to live in Hydesville in upstate New York.

At first, Maggie and her younger sister, Kate are restless and bored living in the unfamiliar little town and begin to play mischievous tricks on their parents. They realise the power of suggestion when they are able to make mysterious noises in the night and get quite a thrill from seeing their parents so puzzled. It all seems pretty harmless until other noises happen without their say so. They have already discovered what might be a human bone in the cellar and now house seems to be waking up and starting to control what happens, using Maggie and Kate as vehicles to communicate.  The wider family and neighbours witness the noises and other strange happenings and the sisters realise that they might be able to turn the attention to their advantage, with or without the permission of their parents. Perhaps they really can communicate with the dead!

Despite being manipulative, Maggie is a complex girl with enduring qualities. Fen Coles pointed out her aptitude for comic commentary throughout as she perceives the many failings of  the various adults in her life. She remains thrilled by the ability to convince people of her powers, but is also terrified at the moments when she feels genuinely haunted. The author explained that this is part of a common YA theme of seesawing power versus powerlessness. It also fits nicely into a long cultural genre of pre- pubescent/ pubescent girls being at the centre of horror stories.

Leah is a much older Fox sister who spots the potential for the girls to make an escape from conventional life, and so helps Maggie and Kate take their talents to a much wider audience. They become minor celebrities who are wined, dined and flattered in a big New York hotel where they hold three séances every day. Everybody is enthralled and Maggie reassures herself that they are helping people to process their grief for dead children and other family members by providing reassurance, even if it is mostly made up. Predictably, the sudden fame takes its toll, especially when a religious minister accuses her of working with the Devil himself. The real Fox sisters had to contend with a lot of anger from more established religious figures because they were seen to be ‘playing with fire’ with probable links to Satanism.

I won’t spoil the story by giving any further detail about the content other than to tell you that I was gripped right upto the last page, which is the mark of excellent storytelling. I also learnt a lot about the well- researched historical context with references to the intersections of radical activism that really existed in mid nineteenth century Rochester, particularly driven by the Quakers and other non- conformist religions. It was a place apparently heaving with political activity around Women’s Suffrage and the Abolitionist Movement – many brave people being directly involved with providing safe passage for escaping slaves form the Southern states. Real individuals are included throughout as examples of those who campaigned to make changes to attitudes and to begin to build a more equal society.

The author makes no apology for making this a story about the mixture of excitement and danger associated with change, at the individual and societal level.  Her earlier novel  'Trouble Makers’ apparently explored some other interesting political themes, ( I need to read it). She  currently co-manages Housman’s Radical Independent Bookshop in London, co-runs the Little Rebels Children’s Book Award for radical children’s fiction and explains that she lives her politics ‘in a safe booky way’. Books like this entertain, educate and disturb at the same time.