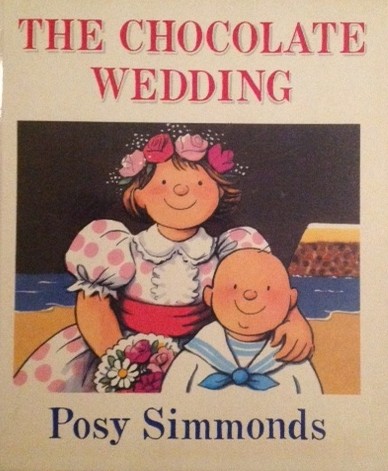 The Chocolate Wedding by Posy Simmonds

Those of you familiar with Posy Simmonds through her adult social satires like Mrs Weber’s Diary or Tamara Drew will be aware of her comic-strip style and her uncanny ability to pin down the follies of middle class life.

The Chocolate Wedding is very much from this stable but aimed at a children’s audience. At the heart of the story is little Lulu who is beside herself with excitement at the prospect of being a bridesmaid at her Aunt Carrie’s wedding. But on the night before the ceremony when Lulu’s family – including her little brother Willie – arrive at her grandmother’s house, they find themselves inadvertently getting in the way of the adults as they busy themselves for the next day.

Soon Lulu gets fed-up of being shuttled around and finds a quiet corner to sit and eat a selection from of her stash of chocolates. Then a few more. Then a few more…. And, as if that’s not bad enough, Willie gets fascinated by the wedding cake sitting on the table and suddenly Lulu spots the bride that should be on top of the cake has vanished. The search fails to turn up the missing bride before Lulu is tucked up for the night.

But all that chocolate has its consequences and Lulu has a troubled dream of finding herself awash on a sea of chocolate and wakes up feeling sick. So sick in fact that the next morning she has to be left at home when the rest of the family go off to the wedding and, and as a result, she will miss her bridesmaid duties. As you might expect, she is terribly upset. But she goes back to sleep and this time she dreams about what might have happened to the lost bride ornament from the wedding cake – and quite an extraordinary dream it is too!

When she wakes this time, she feels better, the family have come back from the wedding and she can finally dress up in her bridesmaid costume. But now she can be the centre of attention because in her dream she has worked out where to find the missing bride. When she restores it to its rightful place on the cake everyone knows she’s made a special contribution to the success of the day and the whole family toast the real bride and groom and the cake-top couple too.

Posy Simmonds’ illustrative style is immediately recognisable and her use of colour creates a rich storyline that stops the book feeling too much like a comic strip and makes it more like a condensed series of individual picture books strung together. As a result, this is somewhat longer than the usual children’s picture book and will appeal to those young readers who enjoy getting lost in a world that’s been created for them.

As I suggested at the beginning, Simmonds is an artist of the middle classes and she never pulls back from simultaneously celebrating them while at the same time gently poking fun at their foibles. I think that it’s sometimes good to see this rather comfortable, monied world in children’s picture books. Great strides have been made in making children’s books  much more diverse in their subject matter in recent years and bringing the marginalised and excluded to the forefront. As a result there is a danger that these more traditional middle-class stories become a bit of an endangered species and might be seen as a bit old-fashioned. It would be a shame if all these different worlds couldn’t coexist and be given an equal share of the limelight.