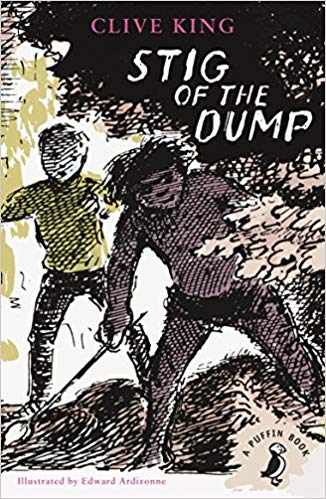 Stig of the Dump by Clive King

As a former secondary school English teacher I’m told on a fairly regular basis that reading books in English classes at school either killed all interest in reading for years after or instilled an almost visceral hatred of certain books – Shakespeare ranks highly in the role of the hated. But there are some notable exceptions to this general rule and these books inspire a sort of nostalgic love, a wistful memory of a reading experience that was a magical. Stig of the Dump by Clive King is most definitely one of the latter kind.

First published in 1963 it’s a fantasy based on a simple idea: in a seemingly endless holiday with grandparents, a bored young boy, Barney, happens upon a caveman (caveboy?), Stig, living in a disused chalk quarry now being used as a rubbish dump and has a number of largely non-threatening but excitingly engaging adventures. King’s great triumph here is to treat the story as entirely reasonable, with a literary straight-face and with no seeming need to actually explain how this could ever possibly happen. The story is simply allowed to exist and be – a glorious piece of child-centred wish-fulfilment.

Much of the charm of the book revolves around the contrast and growing friendship between the modern, civilised boy, Barney and the wordless, grunting but entirely affable, Stig. Both are keen to introduce each other to their own worlds and Barney’s visits to Stig become little tales of adventure – hunting, building fires, making flint tipped axes and arrows, dealing with newcomers. Although Barney is quite open with his sister and grandparents about his days spent with Stig, they prefer to think that this is all children’s fancy and imagination.

So, where did Stig come from? King rather cunningly gives us an ending that allows us to construct our own explanation – was it all just a piece of childish fantasy or was there something magical going on? He does this by giving Barney and his sister an almost hallucinatory bit of time-travelling on one especially hot summer solstice night when they are transported back to a time when they can meet and interact with Stig’s whole tribe. But did that really happen or did the children simply fall asleep and dream it all? It’s up to you to decide and King doesn’t force you down one route or another.

And, of course, there’s another element to this book that everyone comments on – the wonderful illustrations by the great Edward Ardizzone. Ardizzone’s illustrative style is very idiosyncratic and immediately recognisable and his small, detailed and dense vignettes are perfectly suited to the text. Stig exists in our minds partly because Ardizzone gave him form and shape.

As with many greatly loved classic children’s books of the 20th century, much of their appeal comes from the absence of adult rules – health and safety, security and safeguarding have no part to play in this world and I think this liberates children and allows them to enter the world wholeheartedly and with no restraints. Stig of the Dump remains a gateway to that world of the child free to roam without being constantly monitored and I’m glad I’m old enough to have experienced that myself – and I mourn the loss of that for today’s children.