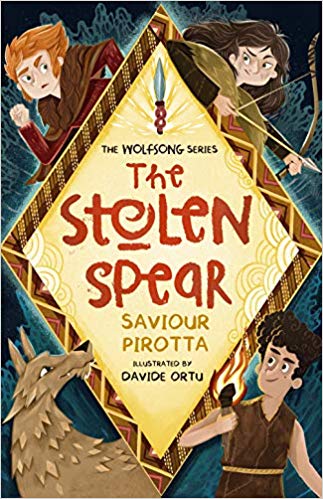 The Stolen Spear by Saviour Pirotta

This is the first book of a new series – projected to be a quartet of stories – that will appear under the collective title of Wolfsong. The author, Saviour Pirotta is an established writer of history stories for children and The Stolen Spear is a good example of his skill.

At the end of the Stone Age a young boy called Wolf lives on Great Island and he’s rather struggling to live up to his name. In a community that expects its men and boys to be hunters and warriors, Wolf knows that these really aren’t his strengths. But despite that he tries hard to make his father proud of him but things are always going wrong.

One day he’s given the job of guarding the sheep from harm while the others go to deal with the unexpected bounty of a beached whale and he somehow manages to get distracted at the crucial moment and a sheep is taken by an eagle. His father, who is already impatient with his ‘hopeless’ son, is furious and Wolf resolves to do something to compensate for the loss of the sheep. He decides the answer is to catch as many auks as possible while they are nesting on the rocks by the sea – but, of course, it all goes wrong for him and he finds himself having to be rescued by a stranger called Crow who has come to the island from across the water.

Wolf and Crow become friends but soon it’s time for the visitor to leave. And that’s when everything goes wrong for Wolf – again! The community discover that their sacred spear has been stolen from its resting place and they soon come to the conclusion that the culprit must be Crow – and that Wolf is to blame for bringing her into the community in the first place.

Humiliated by this turn of events, Wolf decides he’s going to sail off, find Crow and discover why the spear was taken. And so his adventure begins.

I’m not going to tell you what happens on his journey or how it all turns out because that would spoil an exciting book that you’ll want to read for yourself. The story has been illustrated throughout in black and white by David Ortu and the illustrations bring a welcome added dimension to the prose.

The book comes from the Maverick Publishing stable and, as with all their books, some real thought has been put into the production. At the end of the story you’ll find a useful historical context note, a short interview with the author and, if you want to use the book in a classroom or group context, a series of potential discussion points.

The series will continue with The Whispering Stones and I for one will be looking forward to my next Stone Age adventure.