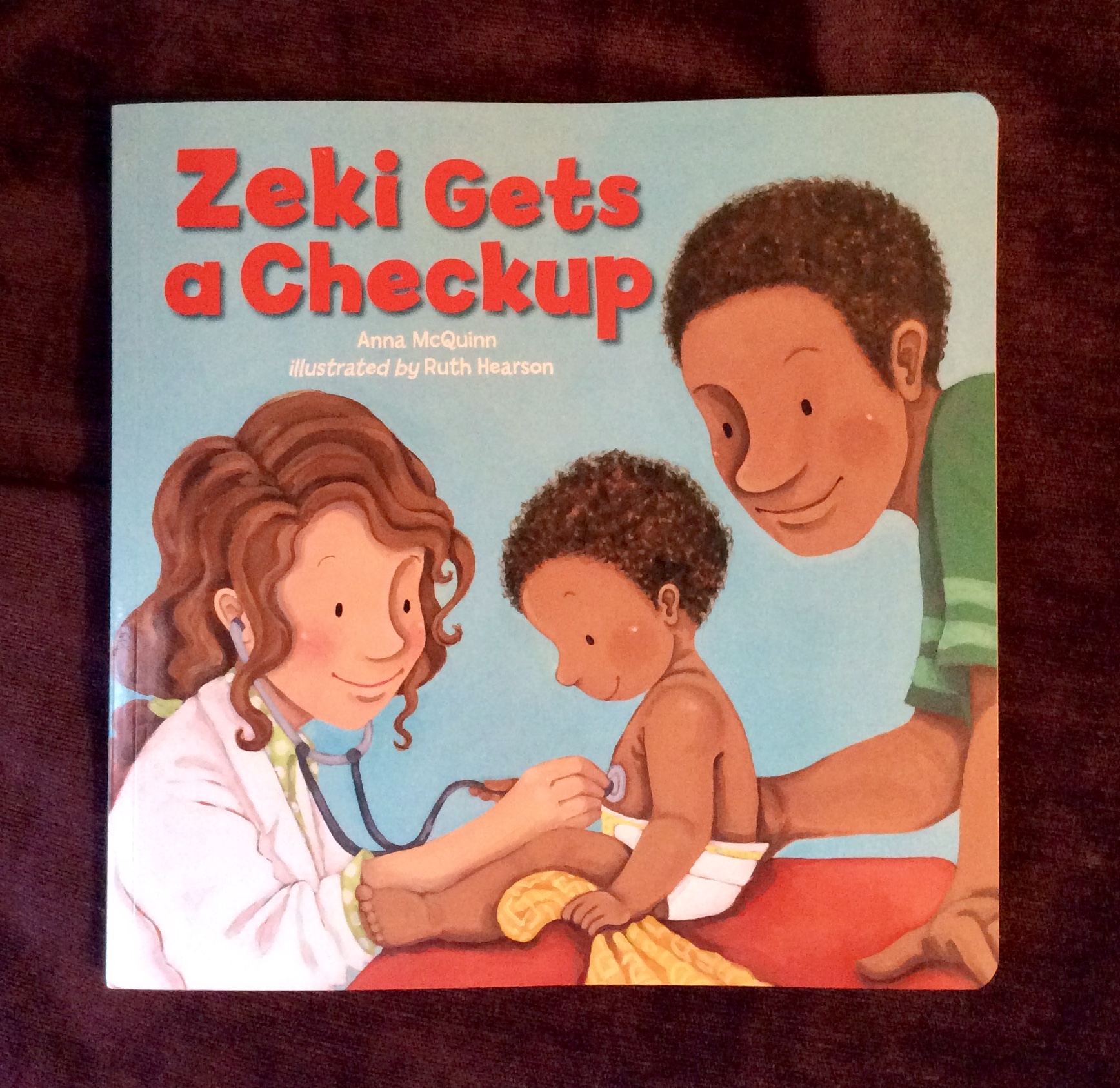 Zeki Gets a Checkup by Anna McQuinn, illustrated by Ruth Hearson

This is the third picture book in a delightful series with baby Zeki as the central character. As with all books produced by this publisher, the emphasis is on portraying an ordinary child’s eye view of, what is to them, a series of extraordinary experiences. What I mean is that they show events that are probably part of every child’s routine but the first time that they happen to individuals, it is easy to miss how exciting and stimulating they are. So in the same way that the first book showed us Zeki going to a Baby Club and the second one enjoying going swimming with his dad, this one describes how he fully participates in his first developmental check up at the doctor’s.

The strong image on the cover sets the tone for what is to follow with Zeki sitting in the centre between his dad and the doctor who is listening to his chest with the stethoscope. All three are smiling and together with the title, this suggests that, although very young, Zeki is in charge of what is going to be a positive experience. The first few pages show other examples of him doing lots of things for himself and growing in independence. For instance, he is drinking from his cup without any help but is encouraged by his mum and dad who are looking adoringly at him. I know that the author is very conscious of making the children in her stories appear as active and capable rather than depicting the more usual passive and dependent characteristics.

The bold colourful illustrations definitely help with this overall atmosphere and help define Zeki as an assertive little boy who can already do lots of impressive stuff. Dealing with the impending experience of a check-up is clearly going to be another triumph.

Dad always plays a very important role in this family and so helps Zeki to pack his bag in preparation for the visit. In a turn of the page they are in the doctor’s waiting room and it’s good to see them waiting alongside a range of other equally cheerful children and parents as he waits for his turn.

Apart from being a story about a memorable character, there is also enough information about the check-up to provide reassurance about a similar real world experience. Zeki appears to still be in overall charge because the first encounter with the doctor shows him demonstrating what he can do and her looking suitably impressed. Then she checks his height, weight, eyes, and heartbeat and the text hints that he is to be congratulated for being so healthy.

I found the page showing him being given a jab rather amusing because everyone is still smiling broadly as the syringe approaches his arm. Choosing to show the moment just before the injection actually happens does at least keep the message a positive one because I suspect in the moments that follow, Zeki’s good mood is likely to have changed to a much less happy one!

This is a charming little story that would be very well received by children, parents and practitioners. At the end of the check-up Zeki gets a sticker and a new book as a reward and I liked the way that this image fills a double page spread with his joyful face as he eagerly touches the book and the focus is on him with only parts of the adult’s faces showing. He is the star of the story after all. The final pages show him leaving the surgery presumably ready and eager for more adventures.