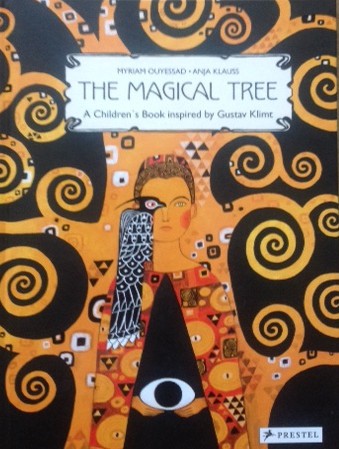 The Magical Tree by Miriam Ouyessad illustrated by Anja Klauss

This lovely volume describes itself as ‘A children’s book inspired by Gustav Klimt’ and the influence of the Viennese artist is to be found on every page. The dominance of gold and vibrant reds around organic swirls of deep black echo the Secessionist artworks of the late 19th and early 20th century. Klimt isn’t just an inspiration here, his style and colour pallet along with the composition of some of his most famous paintings provide the dominant motif of every page. At the end of the story there are two pages of information about Klimt and his art which will provide younger readers with some context and will hopefully send them off to take a look at the artist’s other work.

Translated by Agathe Joly from the original French edition which was published in 2015, Myriam Ouyessad has provided an enigmatic, magical little tale of the Tree of Life - which draws on Klimt’s designs for a mosaic which was designed to grace the dining room of Belgian banker, Adolphe Stoclet. Entranced by the design, Ouyessad looked hard at the swirls and twirls of the Tree of Life and saw her characters embedded in the decorations. At the very outset of the story Djalil is given a sacred trust, to protect and care for ‘a seed as big as a fist and as shiny as gold’ that would some day grow into a very special tree. He faithfully does as he is asked until one day, at the right time and in the right place, he plants the seed which will be protected from predators by his specially trained falcon.  Rapidly the seed grows into something very special – a magical tree that allows you to see into the future. But what does Djalil see? Something terrible…….

But you’re going to have to read it yourself to find out just what it is that Djalil has seen.

This large format picture book is a real feast for the eyes and it’s the illustration that you’ll want the book for. I really have no idea how appealing this will be to younger readers but it will entrance adults – especially if you’re a fan of Gustav Klimt. It is sometimes quite difficult to use and adapt the work of established artists in children’s books without seeming clumsy or preachy but this one works well I think because the artwork of Klimt dovetails well with the mysterious and mythical story. Copies of the book which was released in the UK in 2016 are hard to find in most bookstores but they can be found online for well under £10.