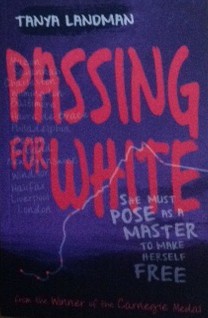 Passing For White by Tanya Landman

The story of Ellen and William Craft is one of the most remarkable slave narratives to come out of that shameful period of American history. Ellen, so pale of skin that she could be taken for a white woman and her husband, William, escaped openly by train and steamboat to the North and eventually on to Britain where they settled and raised five children. Extraordinary enough in its own right given just how difficult it was for any slave to escape their masters but what made this even more fantastical was the manner of the getaway – Ellen disguised herself as a Southern gentleman and, presenting William as her personal slave, managed to sustain the subterfuge until they reached Philadelphia and freedom.

Tanya Landman has taken this story and woven her reimagined narrative in a way that is essentially truthful to the key facts. She changes the names of the central figures to Rosa and Benjamin and adds an interesting innovation by telling the story through the eyes of Rosa – making the story much more immediate, up close and visceral.

The book is published by Barrington Stoke who specialise in producing books for reluctant readers or those who struggle to read because of issues like dyslexia and this means that Landman has to be tight and economical with the story. This puts significant demands on the author when it comes to writing about such a complex and emotionally fraught story and it takes skill and judgement to keep the story true to the spirit of the original. Not only does she walk that line successfully it’s also fast paced enough to keep the reader constantly aware that Benjamin and Rosa are in mortal jeopardy for most of their journey.

Although it could be argued that Landman’s treatment inevitably simplifies both the context and experiences of slaves seeking to find their freedom in a country hostile to everything they represent, I think she still manages to produce a narrative that is full of compassion and humanity. I can easily see how a book like this could be used in a classroom setting to stimulate discussion about a whole range of issues relating to slavery and would provide a really useful jumping off point for a deeper exploration of the social history behind it.

One of the admirable qualities of this book is its refusal to skirt around difficult issues. Landman is upfront about the way Rosa is sexually exploited by her slave master and the abrupt ending of two pregnancies – not easy territory. She also confronts the use of the language used about slaves and black people in general and, as she says in her brief afterword:

Offensive terms such as ‘nigger’, ‘boy’ and ‘negro’ were in common use when William and Ellen Craft escaped from slavery. To not use them at all seemed to me to be a dishonest ‘cleaning up’ and softening of a brutal reality.’

Precisely true. Landman has written a brave book for a teenage audience and she should be applauded for having the courage to see it through without too many compromises.