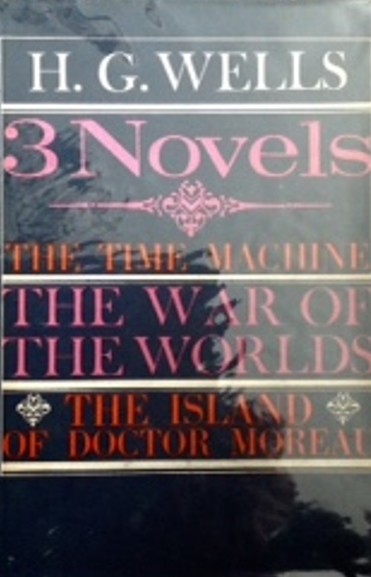 The Time Machine by H.G. Wells

The popular perception of Wells’ first attempt at science fiction – or more properly, speculative fiction – is that it is primarily an adventure story of a Victorian scientist set adrift in a future dystopia. That is, of course, true at one level but it is only one dimension of this novella because Wells is always a more complex writer than popular film adaptations tend to allow for.

Wells allows the time traveller – no other name is given to him – to narrate his story of his journey into the future to a clubbable group of fellow professionals in his London house. He starts by inviting them to an evening event where he tells them his theory of time travel and then shows them a working model of his time machine – which he sends off to the future. Most are sceptical and suspect a magic trick but he also shows them a full-scale machine that he intends to use and most of them are intrigued enough to return a week later when he promises to tell them of his adventures.

When they are gathered again, the time traveller is late and the group start to suspect he’s not turning up. Just at that point he staggers into the dining room in a state of distress and disarray and tells them an incredible story.

It would be a spoiler to tell you that story here but what does interest me is the way in which Wells embeds his political messages in this dystopian fable of the future. He uses the story to explore the idea that divisions based on social class might see the destruction of the human race in the longer term. He tells of the way in which entrenched privilege and exploitation enfeebles an elite class – the Eloi -  who, no longer able to fend for themselves, have become vegans while a brutalised labouring class – the Morlocks - toil underground to keep this elite in a state of ignorant hedonism and cannibalizing them by night.

Neither group is any longer able to act rationally or to communicate effectively and the extinction of humanity is inevitable – it’s just a matter of time. In many ways it’s possible to see how Wells’ dispiriting vision of humanity’s future led him to flirt with the terrible philosophy of eugenics. Matthew Taunton writing for The British Library website also picks up on this link:

“The scientific romances allude to this, in the disillusioned view of a split society in The Time Machine and the international offers of help in The War of the Worlds. One prevalent means of applying science to social policy was eugenics, the pseudoscience which advocated the selective breeding of humans, now heavily associated with Hitler’s death camps. Wells certainly dabbled with eugenic ideas: in Anticipations (1902), he praised 'the nation that most resolutely picks over, educates, sterilizes, exports, or poisons its People of the Abyss'.[5] But he also dissented from the hard-line eugenics advocated by Francis Galton and others, advocating education rather than compulsion. In A Modern Utopia prospective married couples are offered eugenic choices rather than forced to marry a good genetic match. But Wells did advocate the sterilization of genetic ‘failures’: an idea that the modern reader is likely to find somewhat chilling.”

Wells takes his reader from an expectation of utopia to a thoroughly terrible vision of the future – one which contrasts starkly with his later book ‘Things To Come’ in which humanity is ‘saved’ by a sort of ruthless scientific hegemony.

“The novel’s depiction of class ends up, then, not as a utopian exploration of future possibilities for the abolition of class in the terms that Fourier and Morris had imagined it. Instead, it is an example of ‘anti-utopian realism’, suggesting that the bitter class conflicts of the Victorian age were bound to deepen and even to take on a biological character as humanity is divided into two species.[5] Worse still – especially given Wells’s own political commitments – the various progressive attempts to overcome class antagonism, advocated by Marx, Fourier and Morris, have failed or been perverted. This profoundly pessimistic vision of the future, then, expresses not only Wells’s horror at the realities of 19th-century class relations, but also his fears about what utopian socialism and communism were offering in their place.”

Barely 80 pages long, this is a novella that confronts and embraces ideas you might expect to find in a much longer piece of work but I really appreciated the brevity and the refusal to make all the messages laboured or explicit. This is the literature of ideas dressed in the attractive clothing of a science fiction adventure. Cunning.