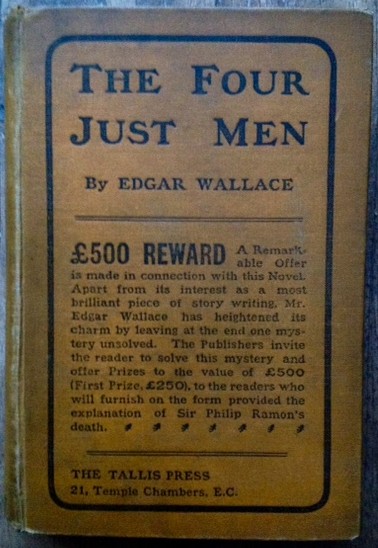 Edgar Wallace and the case of the Four Just Men

I recently listened to a Radio Four Extra programme in which crime novelist Mark Billingham reviewed the life and career of the prolific pulp crime novelist, Edgar Wallace. It’s often chance events like this that can lead you down some very interesting rabbit-holes as you start to dig a little deeper into a subject that until that point had been, literally, a closed book.

As I began to follow up Billingham’s interesting portrait of the man, I discovered that his life and career – although largely unremarked on now - was quite an extraordinary one and one lived for much of the time in the public eye. People will have different opinions about Wallace’s qualities as a novelist but one thing that everyone will agree on is that he was one of the first masters of self-publicity and a wizard when it came to creating a literary ‘brand’ that promoted his sales into the stratosphere.

Wallace was born in 1875 and died in 1932 at the comparatively early age of 56. However, following the publication of his first novel – The Four Just Men in 1905 – he was astonishingly prolific, producing well over 150 novels and a host of screen plays, stage plays and short stories. He came from a working class background, leaving school at 12 and joining the army at 21, becoming a war correspondent during the Second Boer War. It seems that Wallace’s roots gave him a pretty unerring knack for spotting what the reading public wanted – and he gave it to them in spades.

And he wasn’t backward in coming forward when it came to flaunting his success – he loved to be flamboyant  and ‘in your face’ and this rather got up the noses of the very middle class detective writing ‘aristocracy’ of the Golden Age of crime fiction. Wallace pioneered a quite different type of crime novel – one which put the police and the official crime bureaucrats at the centre of the action rather than a well-to-do private investigator of the type favoured by Christie, Sayers or Allingham. As a result his name isn’t associated with a specific character like Poirot or Wimsey – although he did have some serial success with The Mind of J.G. Reeder which featured a seemingly mild-mannered employee of the Department for Public Prosecutions.

All of this took me on to what is perhaps his most famous book – which also had two or three associated subsequent follow-up publications – The Four Just Men. I did order a copy of this out of curiosity - but a curiosity not born of any great desire for the story it tells so much as for the story behind it.

From the perspective of 2021, Wallace’s central plot conceit seems more than a little questionable, politically and morally. Four rich and socially prominent people have formed themselves into a secret cabala dedicated to executing prominent public figures who they feel have acted inexcusably and caused the suffering or death of others by their actions. In other words, these ‘Four Just Men’ as they style themselves are vigilante terrorists. Hmmm……

Anyway, one of the four has been killed before the book’s action begins and the other three have substituted him with a ‘common criminal’ who has the skills they need to carry out their latest mission – the assassination of the British Foreign Secretary, Sir Philip Ramon. He is planning to introduce the ‘Aliens Extradition (Political Offences) Bill’, which would remove protection from extradition for foreign nationals living in exile in the UK and this is seen by The FJM as unacceptable in that it exposes to danger of death those who have challenged dictators.

And we know from the outset that they will succeed in killing their victim at their specified time in their specified manner but what we don’t know is how. What follows is the build up to a closed room murder mystery that Wallace gives us plenty of clues to but never actually reveals in the book itself.

The reason the mystery isn’t resolved in the book’s pages is that Wallace hit on the idea of making the solution part of a competition – offering a lucky reader a massive (for the time) prize of £500 ( he was actually dissuaded from making it £1000). Whilst this challenge, emblazoned on the front of the book, led to there being massive sales of the mystery, Wallace was better at promotional ideas than the legal details of the offer. It turns out that he meant to offer ONE lucky winner the prize but was so sloppy with the wording of the offer that he actually commits to EVERYONE who solved the mystery getting the prize. It turns out that quite a few people cracked the mystery and Wallace was taken to the verge of personal bankruptcy.

He ended up having to sell the rights to all the FJM series in order to fend of his debtors but it can be argued that this early notoriety gave him an invaluable public profile and he more than made good on the rest of his tumultuous output.

Let’s be honest, this first instalment of The Four Just Men isn’t a particularly well written or spellbinding mystery but when the background story of the botched competition is added to it, there’s plenty of intrigue to enjoy.