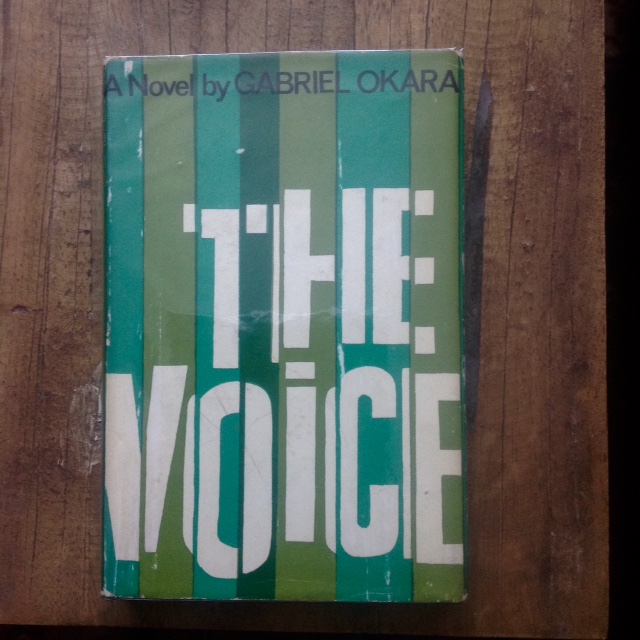 The Voice by Gabriel Okara

When Gabriel Okara died in 2019, his obituaries talked of him in terms of being the single most important writer on the modern Nigerian literary scene – and, to my shame, I’d never heard of him. Okara was first and foremost a poet but everything I read seemed to single out his 1964 novel, The Voice, which was described in ways that suggested I’d been missing something quite special. Unusually enough in an age of hyperbole, this turned out to be something of an understatement – this book must be one of my standout reads of last year.

This is quite a short book – almost an extended folk tale – but the thing that will really grab your attention is the extraordinarily brave experimentation with style. His biographical entry in Britannica captures this most concisely:

“ His first novel, The Voice (1964), is a remarkable linguistic experiment in which Okara (is) translated directly from the Ijo (Ijaw) language, imposing Ijo syntax onto English in order to give literal expression to African ideas and imagery. The novel creates a symbolic landscape in which the forces of traditional African culture and Western materialism contend.”

Okolo, whose name translates as The Voice, returns from studying abroad to live in his small village home of Amatu. But he is fired with the unquenchable desire to find what he calls ‘it’ – the meaning or essence of life. But this thirst for understanding doesn’t sit well with the traditional power structures of Amatu and  the village chief, Ozongo, who along with his elders, thinks that Okolo’s  willingness to question everything threatens their traditional position.

Passions are inflamed against Okolo and, despite the support of other social outcasts, he is eventually forced to leave the village and try and find his way in the big city of Sogala.  But he discovers right from the outset that he’s not going to find ‘it’ there either – even on the boat ride from village to city he finds his simple human gestures of help misinterpreted and manipulated. As soon as he sets foot in the city he suffers abuse and exploitation from seemingly everyone he meets and finds that the law enforcement agencies are no help to anyone who doesn’t oil the wheels of corruption.

It’s not long before he recognises that he will have to return to his home despite the fact that he knows he will face the ultimate punishment of perpetual exile if he does. But he knows in his soul that he must return to plant a seed that will inevitably mean his community will have to face the inevitable march of the modern.

The book is truly compelling and the linguistic experimentation Okara is using imbues it with a lyrical power that ties you into a rhythm that is impossible to resist. I can imagine that this won’t be to everyone’s taste and there may be some who read this review, get hold of a copy and wonder what the fuss is about. Others I hope will be able to join with me in marvelling at a piece of writing that confounds Western expectations of how we use language to convey ideas.

I was very lucky to find a good first edition with jacket twelve months ago at an affordable price but these have now become as rare as hens’ teeth and frighteningly expensive. There are paperbacks available but again not as easy to find as you might expect – but don’t give up because it’s well worth the effort.