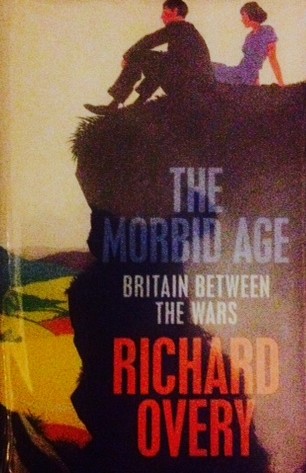 The Morbid Age: Britain between the wars by Richard Overy

The twenty years that cover the time between the end of the First World War and the start of the Second has proved to be fruitful territory for historians of all sorts – social, political, military and cultural. So much of significance seems to be crammed into those conveniently book-ended years that the temptation to dig into the period from a specialist perspective must be near to irresistible.

So finding a new take on this window of time must be something of a challenge but it’s one military historian, Richard Overy has taken on with a degree of relish. Alison Lights, reviewing the book for The Guardian back in 2009, says this of the territory the author has moved into:

“The Morbid Age is a fresh take on those familiar accounts of a desperately hedonistic "jazz age" followed by the "anxious 1930s". Instead of rehearsing the imaginative responses of artists and aesthetes, poets and angry young politicos, Overy marshals a cohort of "opinion formers" and public intellectuals - politicians, academics, economists, doctors and scientists.”

Essentially what Overy seeks to show is that in almost every discipline the tide of thought tended towards the dark rather than the light. The idea that society, civilisation even, was on the verge of its own annihilation gripped what might be called the public intellectuals of the day and led them to postulate ideas and theories that would culminate in the twisted and horrifying realities of Fascist thought and Fascist terror. As Overy himself concedes, there was to be found "a language of menacing catastrophe in most areas of public debate."

Nothing illuminates this state of mind more terrifyingly and more graphically than the emergence of the notion of eugenics – an abomination of an idea that was grasped by prominent public figures from across the political divides. Overy also writes engagingly about those who wanted to hail the death of ‘Capitalism’, which so many political philosophers saw as the cause of the Great War and the terrible Great Depression that came along at the end of the Twenties. And, all of this pessimism dovetails neatly into the crisis of the individual that is revealed by the emerging science of psychotherapy.

Of course, Capitalism survived it’s scheduled demise and, as Peter Preston notes in his review of the book for The Observer:

“Yet, as Overy remarks, somewhat sardonically, recession itself had touched Britain comparatively lightly: Mosley's Blackshirts were pale ghosts of Mussolini's dreams, the world across the Channel (or Atlantic) suffered far more. Civilisation survived, even triumphed. So did capitalism. Westminster yakked on as usual. Dystopia didn't happen. "Democracies are no more immune from the distortion of reality or from the dangerous power of popular fear that provokes it, either then or now." And learned men, caught in a maze of frail perceptions, can be as foolish, and wrong, as any.”

Diligently researched, I found the book gave me a new perspective on the inter-war years and especially on the collective frame of mind that pervaded the intellectual landscape. For me, however, I felt the book was a touch overlong and was running on empty by the end and both the movement for pacifism and Utopianism seem to me to demand their space in the book but fail to come to life in the way the first half did. Overy, essentially a military historian, regains his surefootedness with the final section that deals with the build-up to World War Two and the European search for the superman and the final solution.

Paper and hardback copies are available on second-hand sites at very reasonable prices and a small outlay will give any student of the inter-war years a valuable extra dimension to their reading that will help bring together a complex age that is full of contradictions.