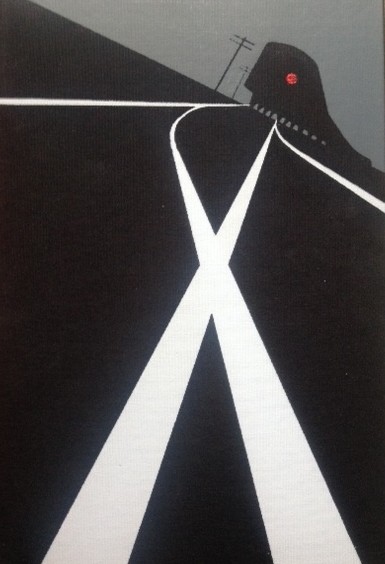 Strangers on a Train by Patricia Highsmith

This was Highsmith’s debut novel published in 1950 and comes five years before her more famous The Talented Mr Ripley but fans of the latter will certainly see the genesis of Ripley in the even more unbalanced character of Charles Bruno.

When the newly successful architect Guy Haines boards a train for Texas to visit his estranged wife, Miriam, and press for a divorce, he meets a fellow traveller, Charles Bruno who goes out of his way to befriend Guy. As the two pass the time in conversation it becomes increasingly clear that Bruno has emotional problems that centre on a hatred of his father and there is a distinct air of suppressed menace in a man who is unstable enough to confess his fascination with the notion of the perfect murder.

Guy’s first mistake is to tell Bruno far too much about his background and about his problems with Miriam and he’s shocked when he’s invited to participate in a double murder – Bruno will kill Miriam and Guy would be required to kill Bruno’s father. Because neither man has a connection or motive for the killings, it would be an untraceable double murder.

Guy rejects the proposition but he hasn’t accounted for the fact that Bruno is now fixated on him and in the coming days and weeks he keeps trying to make contact with Guy as he has an abortive meeting with Miriam. Convinced that Guy is his bosom-buddy and that it’s his duty, Bruno goes ahead with his murder of Miriam and then sets about trying to force Guy to carry out his side of the (non-existent) bargain.

At this point Guy’s world starts to spiral out of control and he’s dragged deeper and deeper into a morass of Bruno’s making. The way the story plays out is the real meat and potatoes of the novel and I’m not going to reveal any more of the plot at this point because it would risk spoiling your enjoyment of what happens.

Many commentators have been critical of the book for its melodrama and for the fact that the story hinges on Guy’s unlikely behaviour and his absurd decision-making. These are perfectly fair criticisms and really demonstrate that there’s a central flaw in the plot – where characters are required to make patently absurd decisions in order to make the mechanism of the plot turn effectively, it’s clear that there is a structural problem.

Having said this, there’s plenty of evidence here of Highsmith’s talent for creating dark and disturbing atmospheres and for drawing us into the twisted minds of the protagonists. Bruno is a genuinely disturbing presence and his obsessive monomania is convincingly drawn. As a precursor for the later character of Ripley, Bruno is a fascinating portrait of a damaged individual and the ability of such people to undermine the moral basis of those around him.

Guy, by contrast, is a less well realised and the weakness and implausibility in the plot hinges on the ability of Highsmith to convince us that his confusion and moral drift are believable – and sadly enough I was not personally willing to go along that path.

What I haven’t seen talked about at any length in other reviews of the book is what seems to me an important but unspoken aspect of the book – a clear homo-erotic  undertow in relationship between Bruno and Guy. Bruno’s obsessive interest in Guy and his desire for him to be a ‘special’ friend and the hatred he has for the women in Guy’s life all speak to a repressed desire for intimacy.

I think this brings an added depth to the story that otherwise becomes a portrait of a psychotic delusion and a willingness, even desire, to kill with a psychopathic indifference to life. Not that this cures some of the problems at the heart of the book and certainly the structural problems remain but I still think it’s a book worth reading and one which will keep you wrapped up until the destructive end.

The book is easily and cheaply available in paperback but if you want a first edition hardback you’ll need deep pockets and be prepared to stump up four figures. There is, however, a very nice Folio Society edition available at a modest enough price.