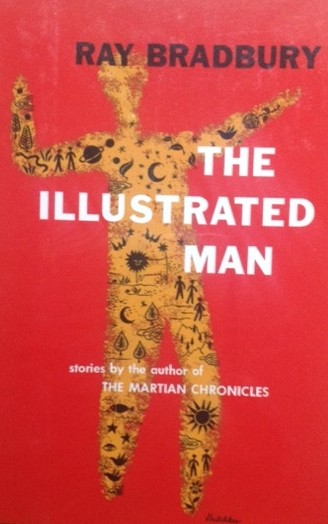 The Illustrated Man by Ray Bradbury

Although Ray Bradbury is usually categorised as a writer of science fiction or maybe ‘speculative fiction’, I think that putting him a genre box of that kind really does him a disservice. The collection of short stories he brought together and published in 1951 under the title of The Illustrated Man really highlights just how feeble a label like science fiction is for his work and his aspirations as a writer.

Although these are a series of seemingly unconnected short stories, there is a superstructure to the book which is designed to hold them all together in the form of the tattooed man whose tattoos tell the stories we read in a series of moving images rippling across his body. This tattooed vagrant, a member of a circus freak show, has had his body tattooed by a time-travelling woman and now each tattoo is individually animated and allows the unnamed observer to witness each story in the collection as if it were a fully immersive experience.

To be honest, this conceit of the illustrated man is really a wafer thin device which even Bradbury largely abandons as a tool for linking the stories the further into the collection we get. But it does allow him at least to top and tail the book with a neat enough introduction and conclusion.

What really holds the collection together isn’t the notion of the animated tattoos but Bradbury’s own concerns as a writer for humanity’s interface with technology and the uncertain future we have in a cosmos we’re increasingly fascinated by, able to explore but essentially unable to understand. Stories like The Veldt which predicts the common use of what we now call virtual reality, very much fit into an essentially earth-bound set of concerns over how technology will change us and that may threaten what we see as the human experience.

Space however can be the distant backdrop that allows him to explore very terrestrial concerns, like race relations or global warfare for example, while setting them in an almost fantasy-like alternative reality. The Other Foot envisages supplicant white representatives of a nuclear war-ravaged Earth seeking refuge on a planet that has been colonised and run entirely by black people expelled from Earth many years before.

Also under the spotlight are religion (‘The Man’), sexual relationships, gender (‘Marionettes inc.’) and the role of video games (‘Zero Hour’), all of which are approached from what is Bradbury’s trademark oblique or lateral direction.

But Bradbury isn’t just interested in man as a social animal but also as a metaphysical being. In ‘Kaleidoscope’ a group of astronauts on a space-walk get cut adrift and are all doomed either to a lonely death in space or to plummet into the planet’s atmosphere and burn-up – their fate is inevitable. Bradbury explores the different ways in which the men deal with their reality, from panic to despair to absurd and unrealistic optimism. The way humanity reacts under extreme adversity is also the theme of The Long Rain where astronauts, lost on Venus and in the extreme psychological distress that is caused by being constantly in inescapable rain, simply give up hope and die.

The film adaptation of this book made, as you might imagine, plenty out of the potential visual drama of the tattooed man and his animated tales of inner and outer space and was somehow marketed as part of the ‘horror’ genre. It wasn’t a great movie but this is a very fine collection of short stories and I think you’ll retain more from the individual high quality short stories than you will from the device of the illustrated man motif that bundles them together.

As is the case with a number of Bradbury’s books, this has become something of a cult collection and a first edition with jacket will cost you a hefty pocketful of dosh. There are, however, plenty of reprint and cheaper hardbacks available and an array of paperback editions that will come pretty cheaply.