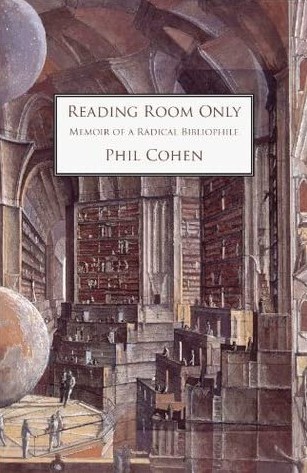 Reading Room Only : memoir of a radical bibliophile by Phil Cohen

“Political activists are popularly supposed to be wild-eyed visionaries or ranting dogmatists who spend their time manning real or imaginary barricades. Bibliophiles, in contrast, are expected to be quiet, retiring types who spend their whole lives in libraries and can only relate to the world at second-hand through books… One of my motivations when I started writing this memoir was to explode these stereotypes…by showing..just how intertwined political engagement and the love of books can become.”

So starts Phil Cohen’s amble through his astonishingly eventful life as an occasional shoplifter, a counter-cultural Situationist, political squatter under the alias ‘Dr John’ and, eventually, an academic sociologist. Throughout all these different incarnations – some of them described with great zest and humour – the shadow of the British Museum Reading Room looms large.

This is literally a book of two halves – the first part is the life story of a middle class, public school educated, Jewish boy, born and living in Bloomsbury, who finds his true identity in the creation of his own ‘reading room’ – a place where books would take him as a sort of escape from the expectations of the real world. After gaining a place to do history at Cambridge, Cohen discovered an environment that enabled him to tune into the zeitgeist of the alternative Sixties. He dropped out of university and, inspired by romantic notions gleaned from books, went to sea with the merchant fleet. Cohen’s experimentation with life included some, to him, confusing encounters with drugs and gay sex but by the time he returned to London in 1965 there was an emerging ready-made alternative scene for him to immerse himself in – and he did so with gusto. Radical politics brought a brief moment of political notoriety as ‘Dr John’, the leader of a squat and then delivered him to the more cerebral Situationist philosophy that was inspiring the Paris student revolts of 1968.

Almost perversely, at the same time as all of this alternative counter-culture was kicking off, Cohen began to rediscover his childhood neighbourhood and, most importantly for him, the point of refuge offered by the British Museum Reading Room. This turned out to be critical because the stress of the squatter lifestyle and his high profile public role in that ‘not only..turn(ed) my hair grey, almost overnight, but it left other, less visible, but just as permanent scars.’

He marries and has a spell as a youth and community worker and essentially – as a chapter heading tells us – he ‘goes straight’. And from that point onwards books take on an even more important role in his life. They have been with him throughout, informing his decisions and his thinking, but now the BM Reading Room becomes a sort of home from home. When the library closes and is relocated to what is now the British Library next door to St Pancras, Cohen shares with the staff a fond farewell to the old institution while welcoming the coming of a new home for his reading and his love of books.

I said earlier that this was a book of two halves and this relocation of his ‘reading space’ really marks the end of the memoir dominated by the sense of place bounded by Bloomsbury and moves into a section he calls ‘Biblioscapes’ which contains his thoughts on what it means to be a bibliophile, a book collector and a compulsive bookshop browser. His views on all of this are heavily influenced by Walter Benjamin’s famous and influential essay, ‘Unpacking My Library’ and if you’re a fellow-traveller and book obsessive, you’ll find plenty to enjoy in this second section.

“All book collectors create myths of origin describing the founding moment of their passion, the point at which a book was recognised as something worth collecting, and the project of building a library begins.”

The book is still only available in hardback but can be found for a little over £10 on the internet. It’s money very well invested for a thoughtful, substantial and hugely enjoyable read.