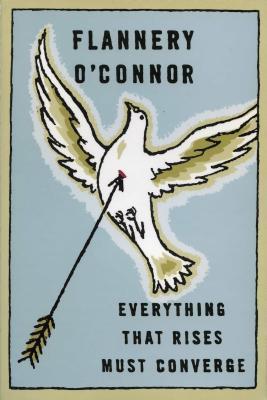 Everything That Rises Must Converge by Flannery O’Connor

I’m not a huge fan of short stories but when I read one that captures my imagination I think it’s a glorious form of writing. However, it has to be said that I tend to find these captivating ones are hard to come by and, consequently, I’m left feeling indifferent by most collections. But what is undeniable is that when a short story works it's a delight and there are individual short stories that have wormed their way into my affection and remain there as little gems that I frequently want to revisit and reread. Flannery O’Connor’s Everything That Rises Must Converge is one of those.

O’Connor herself is a complicated and often problematic author as far as I’m concerned. Just 39 when she died from the effects of hereditary lupus, O’Connor was a committed Catholic and this is reflected in often surprising and unexpected ways in her fiction. She wrote two novels in her lifetime but she was by temperament a short story writer and she published over thirty of them - the collection of the same name that contains Everything Rises was released posthumously. She is part of the literary tradition that has become known as Southern Gothic, which, alongside her Catholicism creates a hotchpotch of peculiar positions on morality and ambiguous positions on race and gender.

Pretty much all of these difficulties and ambiguities are apparent in Everything That Rises but rather than undermining the story they make it indefinably stronger. The result is a shining little gem that I must have read at least a half dozen times and always feel rewarded for it. O’Connor’s writing style is deceptively direct and conversational – it has that hugely desirable quality of seeming to have been so easy to write that anyone could do it. Well, they couldn’t. The characters are fully formed and extraordinary visual – I defy you to read this and not give the individuals a full life, imagine their backstory and share their emotions.

Because this is a short story that can be read comparatively quickly and occupies only 20 or so pages, I don’t plan to give you a summary of the plot because I can’t imagine that anything I would give you would do anything but spoil the experience for you. What is worth saying however is that there are some really fascinating themes rippling through the story which, I have found, take their turn in pushing to the forefront of the readers’ interest.

First, and probably most obviously, is the clash of what might be called ‘old’ and ‘modern’ values embodied in the mother and son conflict that lies at the heart of the narrative. By extension, of course, this is a proxy of the battle for the soul of the ‘the South’ and all that stands for. The casual, structural racism that is evident on the bus ride that mother and son take to her exercise class is made ambiguous by the creation of a black character who exactly mirrors the worst aspects of the mother.

But it’s also a story about cross-generational relationships and maybe even between ‘tradition’ and education. The highly educated but dependent son’s petulant, even arrogant, impatience with his mother and her bigotry contains within it as much a critique of the modern world as the portrait of the older women who cleave to out-dated attitudes.

In the end both sides have to rise above their entrenched positions and in the act of rising they will converge. This is a philosophy that O’Connor took directly from the French theologian and philosopher Pierre Teilhard de Chardin who developed a life principle he called the "Omega Point" which he summarised in this way:

"Remain true to yourself, but move ever upward toward greater consciousness and greater love! At the summit you will find yourselves united with all those who, from every direction, have made the same ascent. For everything that rises must converge."

This is such a rich and multiply-layered short story that it’s brevity belies its scope. Once read I’m sure that, like me, you’ll return to it again and again and continue to be delighted and intrigued by it.

You’ll find copies of the collection to which this story gives its title for very little in paperback and you’ll pay a bit more in hardback – but it would be worth every penny.