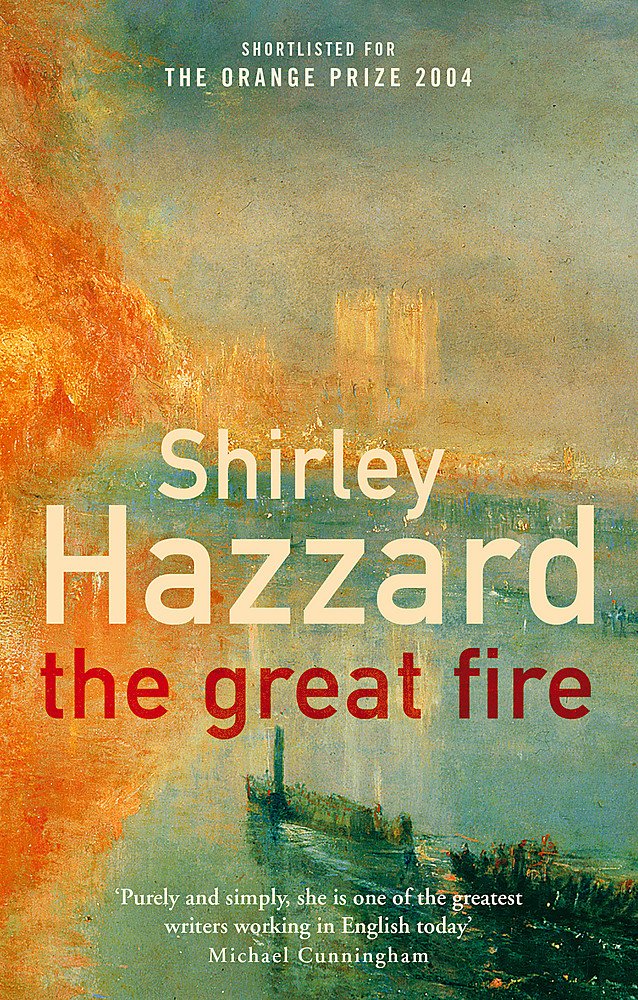 The Great Fire by Shirley Hazzard

It’s a bit of a cliché to call an author ‘a writers writer’ but in the case of Australian novelist, Shirley Hazzard, it’s a phrase I think is fully justified. She was far from prolific and when she died in 2016 at the age of 85 she had only four novels, two short story collections and a handful of non-fiction titles to her name. But despite this modest roster of work, her reputation within literary circles is undisputed while at the same time that is not really reflected in her public profile amongst the wider reading public.

Perhaps one of the reasons for this is her often idiosyncratic prose style which takes some getting used to. Critics have remarked on way that the overall effect of her writing is similar to that of Henry James where refinement and nuance attend every decision about the words used and the order in which they appear in a sentence, inside a paragraph and its position on the page. In truth I can find that all a bit wearing - but when it works effortlessly it can wrap the reader in detail that’s almost a tangible sensory experience.

The Great Fire was her last novel, published in 2003 and coming more than twenty years after what is probably her most famous book, The Transit of Venus. Set in 1947 the ’great fire’ of the title serves a multiple purpose – it’s the conflagration of the world war; a graphic description of the atomic bomb dropped on Hiroshima; and, the inner state of mind of the cast of characters.

Aldred Leith is 32, something of a war hero and the son of a famous but cold-hearted author who is in Japan as part of his project to write a book of his own about the cultural future of the Far East. Leith becomes fascinated by the brother and sister couple, Helen and Benedict Driscoll who are the children of an obnoxious colonial-minded husband and wife who have a role in the governance of the post-war region of Kure. The children are as delightful as their parents are revolting - but Benedict is being slowly twisted and wasted away by an incurable disease that will cause his early death despite all efforts to cure him. Leith will eventually develop a romantic fascination with the very young Helen that her parents will make it their mission to protect her from.

Hazzard introduces a second strand of the story through the mechanism of Leith’s best friend, Peter Exley, an Australian, who is in Hong Kong interrogating Japanese war criminals. Like Leith, he too has academic ambitions and the paths of the two old friends run in parallel but reach very different conclusions.

Alan Wall, reviewing the book for The Guardian picks up on a sense of the moral vacuity of the modern world that Hazzard confronts:

“The novel moves back and forth: Japan, China, Hong Kong, Britain. The author's view of this international post-war reality is disenchanted to the point of dyspepsia. Squalor, physical and mental, is evoked with a clarity only possible to a writer of fastidious intellectual assurance.”

“Politically, The Great Fire points in two directions. Hazzard, who lives in New York, is careful to include a sympathetic American character, a potential rival of Leith's for Helen's love who more or less resigns in his favour, and who represents the passing of power to Washington as the supersession of a dextrous empire by a maladroit one. Unreflecting anti-Communism in Europe and Asia will stoke a Cold War and light the fuse for a warmer one.”

Ultimately I found myself rather unsatisfied by the novel. The decision to provide two centres in the story – a main one centred on Leith and a subsidiary one around Exley feels artificial and forced. Somehow neither strand quite sustains momentum and the dark/light, hope/despair contrasts across the two storylines don’t help with a sense of final resolution.

The Great Fire won the National Book Award for Fiction and the Miles Franklin Award in 2004 when it was also shortlisted for The Booker. Copies can be obtained in both paperback and hardback for not very much money.