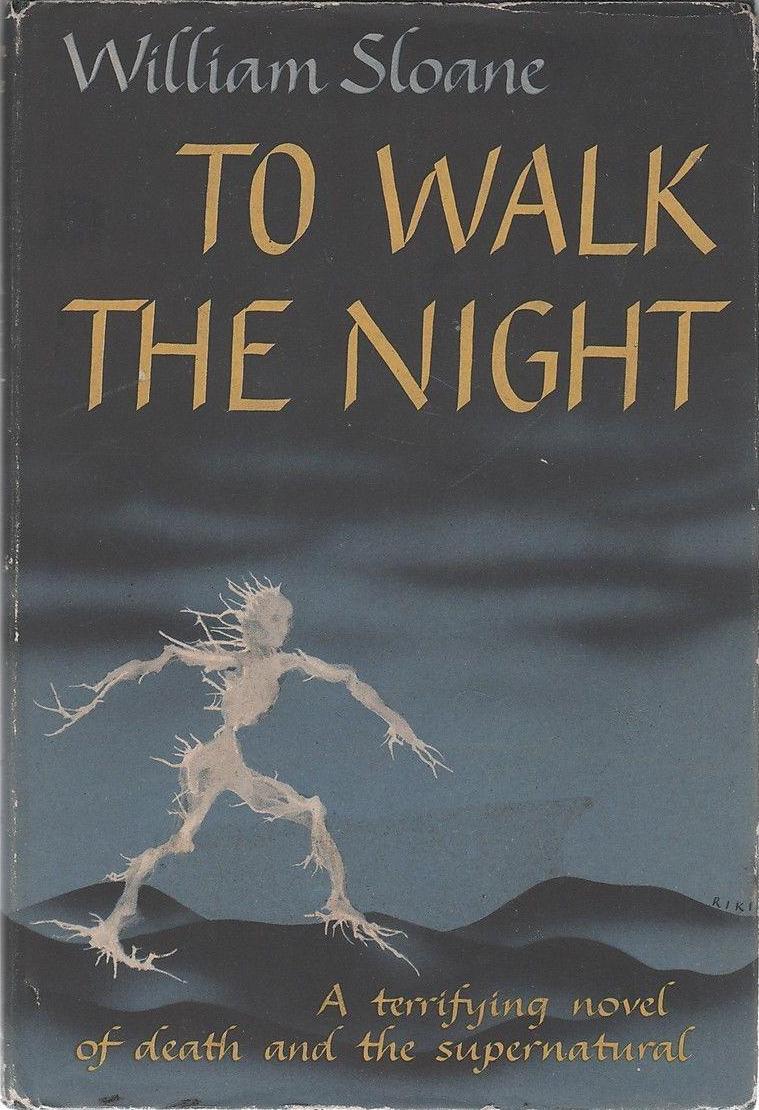 To Walk The Night by William Sloane

To Walk The Night was the first full-length novel by a man who made his name both as a publisher and as a writer of science fiction/fantasy and it remains probably his best work. Published in 1937 it reads rather like watching a classic black and white science fiction movie from those days when Hollywood found the genre provided reliable metaphors to represent the political panic that existed over the incursion of Communist ideology into the good old US of A. If you want to capture the dominant atmosphere of the book think of Don Siegal’s 1956 masterpiece for the cinema, Invasion of the Body Snatchers.

The structure of the book is simple but effective and involves the time-honoured device of someone telling us about the history behind a mystery - where we know most of the outcome from the beginning but we aren’t at all sure why the events took place. In this case the book opens with Berkeley (Bark) Jones driving to the house of the father of his life-long best friend, Jerry, to tell the old man about the suicide of his son. Jerry, it turns out, has shot himself in the head whilst on a remote retreat with his new wife, Selena and during a visit from Bark that Jerry had urgently requested.

Through the course of that night Bark tells Jerry’s father his story – the full story of Bark, Jerry and Selena – and slowly unveils his terrifying and deep-seated belief about why Jerry may have acted in the way he did.

I’ve got to be careful not to give away any spoilers here because it is the unfolding of the story that holds the reader and although we’re given plenty of signals about what might be going on, the mystery isn’t really uncovered until right at the end. What I can say is that the success of the book depends almost entirely on the creation of atmosphere and not on the quality or depth of characterisation or attention to detail. As is true with many stories of a similar kind within the science fiction/fantasy genre, if you stand back too far and ask questions about the motivation and behaviour of the characters, substantial holes start to appear in the fabric. Books of this kind require you to stay immersed in the pressure-cooker atmosphere they create in order to get you to go along with what becomes an increasingly unlikely series of events.

Sloane pulls off that trick well enough and central to its success is the creation of a narrator with whom you can identify. Bark Jones is an only slightly smarter than average everyman whose description of the mystery of his best friend’s suicide is done in such a way that we are immediately in his camp and pretty much stay there the whole time. The notion that he arrives with his terrible news exhausted but unable to sleep until he has told his tale, has a hint of the horrors of the Ancient Mariner about it.

The other key creation is the mysterious but beautiful Selena, who is the enigma that must be unravelled:

“The nearest I can come to a description of her is to say she was like one of the beggars on a city street whose faces are indifferent to life because they no longer have anything to hope from it. She was not tragic, or sorrowful, or frightened. She was simply indifferent.”

Appearing seemingly from nowhere she first marries a brilliant scientist and mathematician who dies in gruesome and mysterious circumstances and then almost immediately hooks onto Jerry who also has a brilliant mind – and who also ends up dead by his own hand, seemingly unable to live with what he has learned about his new wife.

But what has he learned? As Bark tells the story it begins to dawn on both him and the rest of us…….

I’m absolutely astonished this has never been made into a movie. It feels like it’s a script just waiting to be picked up by someone with a lot more money than I’ve got - but if there’s anyone out there in the film making business who wants to cash in on my tip, I’ll be happy to take a finder’s cut.