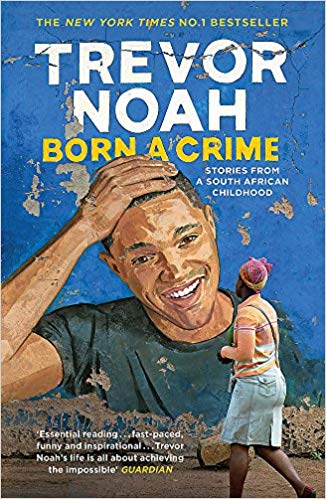 Born a Crime: Stories from a South African Childhood by Trevor Noah

As a teenager growing up in the 1970s, I learnt quite a bit about the cruel Apartheid regime of South Africa from reading ‘Cry the Beloved Country’ by Alan Paton. Much later I discovered and learnt more from reading novels by Nadine Gordimer, J.M. Coetzee, Gillian Slovo and Beverley Naidoo. But this fascinating autobiography by the comedian and political commentator, Trevor Noah was a real eye opener, perhaps because the often devastating revelations and the wry humour are seamless.

The author has lived in America since 2011 where he currently hosts a popular satirical TV show. The many detailed anecdotes about his early life in South Africa are prefaced in each chapter with interesting historical information. Most of us know very little about what it was like to grow up as a child in a country where having a black mother and a white father was a criminal offence ( hence the title of the book). His parents could never be seen together in public or they would be arrested and he would have been taken into care. His mother would walk behind him when out at the park and the ‘coloured’ woman who was looking after him, with the strict instruction that he mustn’t ever acknowledge her. He never met his Swiss German father’s family but his black extended family living in Soweto treated him with awe because of his very light skin, to the extent that he was often allowed to be quite naughty and to be excused from doing any chores. When staying there (sometimes because his mother was in gaol because she had overstayed the curfew in a white area without the right permits), he had to be kept inside his grandma’s house away from prying eyes of neighbours who might otherwise report his existence to the authorities.

Despite all this, Noah grew up to be a clever, cheeky and imaginative boy, but never felt quite comfortable about his racial identity. He always gravitated towards other black children and young people rather than others that physically looked a bit more like him. The irrational and convoluted racial categories of Apartheid confused him even more, although, of course, he only understood their divide and rule purpose in retrospect. Who after all could make any sense of a government that classed people of Chinese origin as ‘black’ but those of Japanese origin as ‘white’? He points out that he was only six when Nelson Mandela was released from prison but that post-Apartheid South Africa was and remains a deeply unequal place to live, so that his whole childhood was affected by negative attitudes and entrenched racism.

Although the political backdrop is very significant, the story is more a tender memoir dedicated to his single parent mother whose own difficult background is referred to throughout the book. She was clearly a beautiful and independent woman who was fiercely determined to prepare her son to live, navigate and thrive in the harsh real world. This included plenty of religion and physical discipline along the way which he describes as constant battle of wills. On the other hand, she wanted him to have a good education, to be confident and articulate, and she also encouraged him to be multi lingual in six languages which often proved to be a powerful tool. She often puzzled him with her uncompromising stance on bringing him up and impressed him with her courage in facing down his feckless and violent stepfather, with whom she had two more sons, who eventually shot her in the face ( she survived the attack with minor injuries). She had many faults but, what an extraordinary woman.

Like many young teenagers living in the South African townships, Noah played his part in various petty criminal scams that were necessary to survive and to maintain his reputation in the community. He was a mover and shaker on the street party scene making regular money providing a much sought after trendy sound system until the computer got shot at and completely destroyed by a policeman. Making a sparse living on the streets in this way was thrilling, exhausting and sometimes dangerous. I laughed out loud when he described how he and his troupe of musicians and dancers were invited to perform at a Jewish School and were soon dismissed by outraged staff when they cheered and chanted ‘Go Hitler’ to encourage one of the star dancers. He was called Hitler, which was apparently a popular name in the black community who sometimes liked to name their children after powerful men, without knowing that Hitler was not the best choice.

His family was often grindingly poor, once barely surviving for weeks on a diet of wild spinach and caterpillars. He explains the pressure to work and sleep in his stepdad’s garage, and then go to school every day without people knowing about his grim home life.

After borrowing one of his stepfathers cars and being involved in a traffic accident, Noah once spent a few terrifying days in the holding cell at the police station which sharpened his awareness of his racial ‘otherness’. Should he risk standing with the many black men who might reject him; the coloured men who he definitely knew to be ruthless gang members who would almost certainly refuse to acknowledge him; or the white men who would probably despise him? Any one of them would possibly beat him to a pulp and none of the others would be that bothered.

I guarantee that you will find that this well written, eventful autobiography is not only educational but also very entertaining and funny. There is plenty of harrowing content but all is laced with self- deprecating humour and optimism that is clearly one of the reasons that Trevor Noah has become such a star. Read, learn and enjoy.