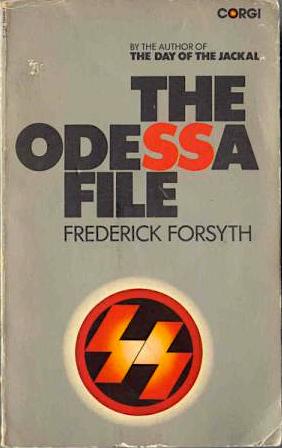 When The Guardian reviewed Frederick Forsyth’s The Odessa File on its original publication in 1972 it said that in Forsyth’s hands the ‘documentary thriller’ had assumed its most sophisticated form. I think it is probably fair to say that nothing quite like it in the thriller genre had previously been done – certainly nothing that drew quite so audaciously on such weighty material as the Holocaust, the collapse of the Third Reich, and the post-war division and de-Nazification of Germany.

The novel opens in Germany in 1963 on the eve of President Kennedy’s assassination in Dallas, Texas. This has some significance in the larger geo-politics of the novel. The central character is one Peter Miller, a West German freelance journalist aged twenty-nine, who is making a good if precarious living writing features for the new picture magazines. A recent windfall – the sale of pictures he had taken of the then-unknown Beatles playing in an obscure Hamburg nightclub – has netted enough to keep him amply supplied with the filterless Roth-Händle black tobacco cigarettes he favours, rent a bigger apartment, and buy a growling long-bonneted 3.8-litre Jaguar XK 150 sports car. Yes, in keeping with the 60s and early-70s, The Odessa File is that kind of novel: consumption matters and style and taste are signifiers of personality and aspiration. It is, I suppose, a decidedly male form of the thriller novel.

Without giving the plot away, while out scouting possible stories Miller stumbles on the suicide of an elderly Jewish man who has gassed himself. He concludes that regrettable as it might be, there is little news value in the death of an elderly Jew, especially when the front pages of every paper in the world are dominated by Kennedy’s murder.

Until, that is, a friend in the police force gives Miller the diary the elderly Jewish man left behind. It details everything the man saw and lived through in the Riga ghetto during the war, just eighteen years earlier, and in particular the exceptional brutality and cruelties of the Nazi commandant of the ghetto, Eduard Roschmann.

And so The Odessa File begins. What follows is a classic documentary thriller of the kind that Forsyth excelled at – crammed with research, reading at times like investigative journalism, at others like a highly-tuned and souped-up version of the kind of adventure writing John Buchan had led the field in sixty years earlier.

But what really distinguishes Forsyth’s early novels is not the depth of the research, but the skill with which these factual, documentary elements are woven into the story and used as a springboard for greater and more audacious imaginings. Few have done this with Forsyth’s authority and conviction. Even now people still ask whether Odessa, the all-powerful secret organisation for defending and resettling escaping high ranking Nazis, really existed. In the context of the novel, there is never a moment when the reader doubts its existence.

And despite its sometimes clunking episodes of explication and not always convincing action sequences, the novel is in fact really very sophisticated. This is especially evident in its examination of mid-60s attitudes to and understanding of the war, particularly as they concern the extermination of the Jews. Forsyth is scrupulous in never allowing hindsight to inform the vision of his characters in 1963/64. For example, at one point someone asks Miller whether he is familiar with what happened to Jean Moulin. Moulin is remembered today as a high-ranking hero of the French Resistance. Betrayed, he was arrested by the Gestapo in a suburb of Lyon where he was held in prison and tortured daily for three weeks. He eventually died on a train en route to Germany. His ashes were eventually re-interred in the Panthéon in a ceremony attended by President Charles de Gaulle and it was then that French cultural minister André Malraux gave what is generally regarded as one of the greatest speeches in French history. But this was not until December of 1964. Peter Miller simply shrugs and says, yes, he thinks he may have heard of Moulin.

It is this unrelenting attention to detail that makes The Odessa File so compelling. Yes, it has its shortcomings, but even here it is remarkably free of the kind of embarrassments that now make many 60s and 70s thrillers all but unreadable.

While The Guardian’s reviewer loved the novel, The New York Times’ Richard P Brickner was extraordinarily harsh. He wrote (and I paraphrase but only very slightly) that a book that is vulgar in its entirety is less offensive than one that vulgarises authenticity, and in his view The Odessa File borrowed “painful, live history in order to spring a few quick thrills”. I have to say I don’t recall feeling that when I first read it many years ago and I don’t feel it now, but it does give you some indication of the vice-like grip Forsyth’s weaving together of fact and fiction can exert – even when the facts are unimaginably awful. And despite the fact that in recent years Forsyth has been better known for his crustily conservative, pro-Brexit Daily Express columns than for his fiction, I still think that his first two novels are classics of a certain kind of thriller writing and deserve to be read, enjoyed and judged by the standards he set all those years ago.