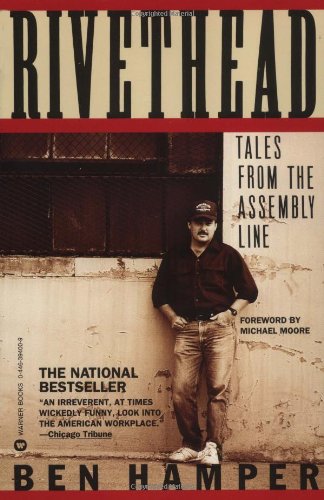 I first read this book well over a decade ago – it was first published in the early 1990s – and, in my memory at least, I really liked it. I recalled it being a coruscating piece of American working class reportage about the demeaning realities of life as a shop floor car plant ‘rat’ and the ways in which workers engaged in covert guerrilla action to seize back some sense of control and power from their employers.

Hamper was a protégé of the film maker and general provocateur, Michael Moore, and was an ordinary Joe with an aspiration to write and a burning desire not to end up working on the GM assembly line in his native Flint, Michigan. Moore gave him that chance to write for the local rag and to later syndicate a column, called ‘Rivethead’, nationally as well. Although Hamper became something of a minor celebrity - and working class hero to some – none of this saved him from ultimately ending up on the factory floor. In fact the work he was doing became the vital source of his inspiration for the columns he was writing. Hamper’s mental health deteriorated over time and he also spent time in mental health facilities – illnesses which may or may not have been the result of GM and its factory regimes.

Coming back to the book after all these years, I have to say that I liked it a lot less this time around. The book itself is really a mashing together and an ordering of content that mostly appeared the first time around in the newspaper columns he wrote. So it retains an authenticity and immediacy because of that – there’s nothing here you’d call recollection in tranquillity. Quite the opposite in fact, the dark humour, the venom and the class politics still fizz off the pages still.

And, he’s very, very funny at times. True, it’s a bitter, often dark humour but it’s also the knowing humour of the man capable of stepping back from his immediate circumstances and watching the way life goes on around him:

“Flint, Michigan. Detroit as seen backwards through a telescope. The callus on the palm of the state shaped like a welder's mitt. A town where 66.5 percent of the working citizenship are in some way, shape or form linked to the shit-encrusted underbelly of a French buggy racer named Chevrolet and a floppy-eared Scotchman named Buick. A town where 23.5 percent of the population pimp everything from Elvis on velvet to horse tranquilizers to Halo Burgers to NRA bumper stickers. A town where the remaining 10 percent sit back and watch it all go by—sellin’ their blood, rollin’ convenience stores, puffin’ no-brand cigarettes while cursin’ their wives and kids and neighbors and the flies sneakin’ through the screens and the piss-warm quarts of Red White & Blue and the Skylark parked out back with the busted tranny.”

His regular columns – and this book I guess – were required reading for both his fellow workers and for management and that, of course, was a double-edged sword. Revealing the details of assembly line sabotage, illicit drug and drink consumption and general arsiness had the inevitable consequence of putting the whole day and night shifts under constant scrutiny – something his compardres were less than thrilled about.

The stories Hamper tells about the lives of the ‘shop rats’ is, of course, an indictment of the factory system and what it does to those trapped in it. But this is also a book full of self-loathing – much more than I’d recognised the first time around:

“The truth was loose: I was the son of a son of a bitch, an ancestral prodigy born to clobber my way through loathsome dungheaps of idiot labor. My genes were cocked and loaded. I was a meteor, a gunslinger, a switchblade boomerang hurled from the pecker dribblets of my forefathers' untainted jalopy seed. I was Al Kaline peggin’ home a beebee from the right field corner. I was Picasso applyin’ the final masterstroke to his frenzied Guernica. I was Wilson Pickett stompin’ up the stairway of the Midnight Hour. I was one blazin’ tomahawk of m-fuggin’ eel snot. Graceful and indomitable. Methodical and brain-dead. The quintessential shoprat. The Rivethead.”

It’s not hard to see the influence of a writer like Hunter Thompson on Hamper and theatrical exaggeration is part of achieving the overall effect he wants but, even so, there is too much of this stuff in similar vein to ignore.

That Hamper doesn’t like himself or his employers is one thing but as I read on I started to get an uneasy sense of a wider, more pervasive misanthropy – a sneering dislike of his fellow workers too and I was increasingly uncomfortable with the language he was using about them:

“Occasionally, I would get drunk and park next to one of the factories just in time to watch the fools pile out at quitting time. I hated the looks on their faces. Miserable cretins, one and all.”

Whilst I prepared to accept that the average worker on Flint GM assembly line at this time was unlikely to have progressive attitudes towards women, there is a really uncomfortable strain of misogyny that runs through the book. Hamper is on record as saying that he was experimenting with writing only “as a way of attracting large-breasted teen-age women” and his frequent references to women’s breasts and their desirability as sexual objects feels on the edge of prurience.

Interestingly enough, the folks at Kirkus have also picked up on some of these issues and also highlight them as failings that detract from the overall impact of the book:

'Although perceptively critical of American business management, practice, and values, Hamper nearsightedly finds little of worth or integrity in his fellow workers, and is downright offensive toward women, who, in his world, “lust for summer sausage.'' '

In many ways you can see that the world Hamper is describing is a pre-figuring of the emergence of a politician like Donald Trump and  that makes the book look more significant than perhaps it did at the time it was published. The blue-collar workers that Hamper presents us with have none of the faded glamour or aspiration of those who people the world of Bruce Springsteen - they are meaner, more jaundiced, more apathetic. Essentially they are broken characters who are trapped in the American Nightmare and too self-absorbed to care beyond their immediate gratification and survival. Hamper's is a bleak vision but you could argue that in the light of the emergence of Trump, their moment was just around the corner.

It's always a disappointment to discover a book you read isn't quite as enjoyable the second time around but I guess that’s what the passage of time can do to both book and reader. I still think this is an important historical document in that it captures the authentic voice of the American working class man at a certain time and place and does so in a way that all the academic studies of the same subject will never quite get right.