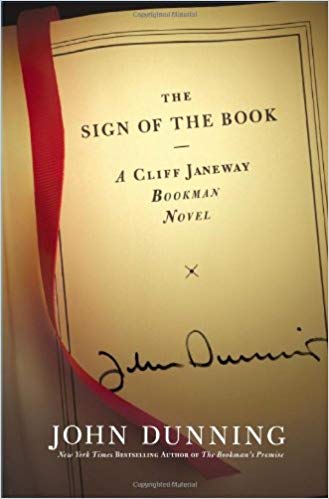 Back in June 2019, I reviewed Dunning’s third instalment of his biblio-detective series featuring the ex-policeman turned book dealer, Cliff Janeway. I thought The Bookman’s Promise was a bit of a dud and quite a disappointment considering just how entertaining the first couple had been. I said then that I hoped the next in the series, originally published in 2005, was back up to the mark and I’m delighted to say that The Sign of the Book pulls the chestnuts from the fire. However, I have to say that it does so by further marginalising the bookish and doubling down on the tough detective mystery element – which is a shame I think.

In this novel Janeway’s blossoming romance with Erin, a lawyer who has also purchased a part-share in his book business, takes centre stage. When she asks Janeway to dust off his police skills and go out to the little town of Paradise ( it isn’t by the way) to help out an old friend, now estranged, who is charged with murdering her husband, it’s astonishing how thick and fast the red herrings start flying around.

Janeway realises he’s taken on a lot more than he bargained for when it emerges that Laura, Erin’s former bosom-buddy, in fact stole the latter’s boyfriend, Bobby, and in so doing generated a positive truckload of bad blood between them. Bobby now lies dead with his face shot off and Laura has confessed to the shooting. Things don’t start too well for Janeway when he immediately makes an enemy of the local Deputy Sherriff and finds himself issued with a bogus traffic violation rap but he’s no idea that this is pretty much as good as it’s going to get as the convoluted case just gets more and more complex.

The detective story – how and why the shooting happened and who did it – is exciting and artfully constructed and the requisite twist at the end, although a touch predictable, is satisfying enough. The book thread, involving a wall full of signed first editions, looks as if it’s going to be a significant part of the plot and rather putters to a close without ever really taking off but, to be quite honest, that doesn’t matter too much because by this point you should be wrapped up in where the mystery is going and how it’s likely to end.

There are plenty of comforting detective stereotypes in the book that you’ll recognise and be at home with almost immediately – the crazy, crooked cop; the autistic savant; the solid, hometown lawyer; the rogue judge; the almost comically incompetent fraudsters – and Dunning shuffles the pack so well that you wont stop to think that maybe you’ve read this one before.

Dunning wrote one final book (it would seem) in this series which I hope brings Janeway’s adventures in the book trade to a conclusion. I’m saving that one for something to read on a dark winter’s evening – and that’s probably the best time for this stuff if you can’t take it out to the beach.