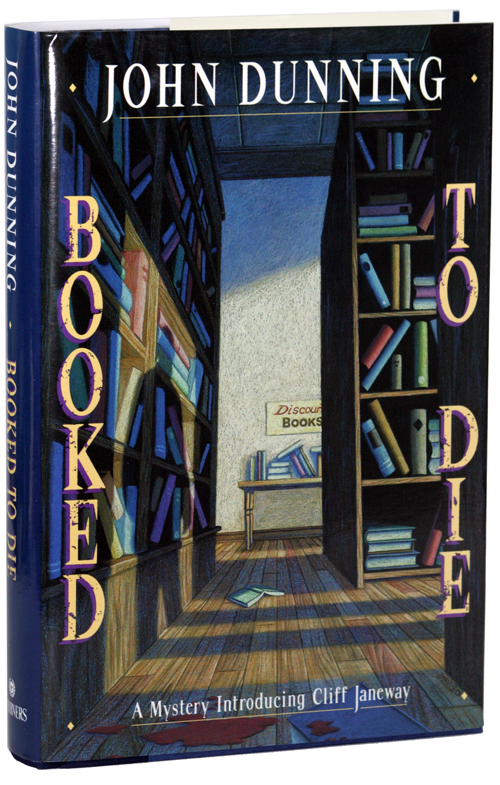 Booked To Die by John Dunning

In my experience as a reader, putting together a convincing detective yarn that incorporates books and bibliophiles is not an easy task – anyone who has spent time trawling second hand and antiquarian bookshops will not immediately associate the owners of those shops with the steely-eyed, keen-jawed look of Raymond Chandler’s Philip Marlowe.

So I am especially impressed that Dunning has not only pulled-off an engaging and compelling book-based detective romp once but across a whole series of five equally enthralling mysteries that have at their heart a story of book-related skulduggery. Published in 1992, Booked To Die is the first in the series and introduces our hero, Cliff Janeway, a Denver cop turned bookshop owner.

Janeway has all the necessary characteristics we’ve come to expect from the street-wise grizzled cop – he has a strong sense of right and wrong, a willingness to break the rules and somewhere beneath the hard-slugging exterior, he’s also got a big heart (but not necessarily a soft one). What makes Janeway unusual is that he’s also a compulsive book collector who knows the Denver second-hand and rare book scene as well as he knows his police precinct.

When the vendetta he has with the body-building psychopath, Jackie Newton final erupts into violence, Janeway knows his time in the police department has come to an end. So capitalising on his booky networks he decides to jump ship before he’s pushed and start a new life as a book dealer with a shop of his own on Denver’s book-row. But cutting his ties with the police force proves to be trickier than he might have anticipated as he finds himself compelled to try and get to the bottom of the sudden and violent death of bookscout, Bobby Westfall. Westfall, like all those who scratch a living trying to find books he can sell on to dealers at a profit, is always dreaming of making the big score. Could his death indicate that he had found a haul of valuable books that someone else was determined to get their hands on?

Dunning gives us the almost perfect blend of procedural detective thriller and nerdy biblio-detail that will keep most book collectors happy. There are some splendid portraits of the other bookshop owners – from the dippy-hippy to the socially inept – and there’s even a glamorous woman of mystery whose house on the hill can only be accessed by appointment and who deals in only the very best of the best when it comes to collectible books.

He also gives Janeway a splendid sidekick, Pinky Pride, a young Scot who appears on the scene to help him set up the shop and generally take in hand the day-to-day running. It is, I should warn you, a relationship touched by tragedy.

The plot is inevitably labyrinthine as Janeway struggles to deal with the seedier end of the book business and handle the constant reappearances of Jackie Newton, who is determined to sue Janeway for the beating he gave him. But despite this the action is all plausible within the detective genre and he has found a way to make books a convincing motive for crime – this is often a weakness of other attempts by other writers to make book collecting dangerous.

If books are more your thing than detective mysteries, you’ll be delighted with the way Dunning blends in lots of bookish facts and tips about collecting. The back of the hardcover edition even has a book collectors quiz. What more do you want?