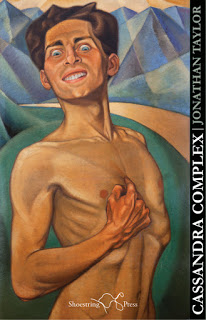 Jonathan Taylor’s latest book of poetry published by Shoestring Press is described on the back cover as “a collection of poems, found poems, found translations, mis-translations, prophecies, pseudo-prophecies, apocalyptic visions and moments of retroactive clairvoyance”.  Whilst this may be an entirely accurate description of the contents, it gives the erroneous first impression that it’s something of an opportunistic collation, a bit of a rag bag even. But that’s not the case at all – it’s a carefully planned publication with the poems selected and placed into a specific order built around Taylor’s deep love of music. The book has four movements with each of them delivering a different perspective or a change in atmosphere and focus.

Taylor’s choice of title gives us a pretty big signal about his focus for this collection. In Greek mythology Cassandra was cursed by the god Apollo to always be right about the future but to never be believed and Taylor uses this as a starting point to consider what prophesy means and what the role of the poet is in interpreting both the future and the past. He is interested in the false prophesies of public and political life but he also those of our private and family lives.

He’s particularly interested in the way prophets claim their foresight when in reality prophesy often depends more on hindsight – claiming you knew what was going to happen after it has taken place is a common trait of the armchair prophet. Taylor, writing about his new collection on his blog site acknowledges this :

“When I was growing up, my father certainly felt he had a gift for predicting the worst, and rather enjoyed being proved right. Like many fathers, he enjoyed saying “I told you so,” when things went wrong – even if he hadn’t.”

Prophesy is, of course, an ancient human preoccupation – the need to know, coupled with a fear of what is going to happen to you, makes it irresistible. Our mortality, it seems to me, guarantees our fascination with knowing. But we’re also, as a species, obsessed with being right and hindsight prophesy (‘retroactive clairvoyance’) is a useful weapon in the quest to be all-knowing.

Taylor’s poems never outstay their welcome – his language is accessible, often colloquial, and frequently wry or even sarcastically humorous. His semi-confessional, domestic poems that involve his family are never mawkish or brutal and he’s not afraid to engage with contemporary culture.

But behind all of this is a man who is engaged with society – the issues of modern life are also those of humanity across the ages. We are a species capable of the very best (represented here by the great musicians) and the very worst (self-serving executives, politicians and broadcasters) and Taylor clearly finds himself consistently disappointed by the triumph of the latter. Living your life requires you to turn on your bull-shit detector. Taylor’s opening poem sets the tone for the whole collection – both serious and ironic.

Long before presidents seemed so crazy

long before anyone mentioned global warming,

before wars were anything but bottled messages

washed up on the sinking island of childhood

and before disease bludgeoned you to death

over godforsaken months and years,

I cracked my head open a metal railing.

In hospital you held my hand when I cried

and told me everything – head, world,

et cetera – would be okay. You lied.

A word too for the choice of jacket cover – a striking reproduction of Ernst Neuschul’s 1919 painting entitled ‘Messias’. Taylor’s poem based on the painting warns us of the messiah complex that potentially lurks within us all – making the image a fitting representation of the whole stimulating and thoughtful collection.