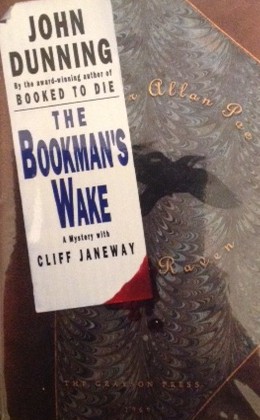 The Bookman’s Wake by John Dunning

In the luxurious position of having Christmas Day and Boxing Day stretching out in front of me with no commitments and a television schedule full of total poop, what better chance is there than this to root out a smart but essentially unchallenging book to get lost in. It’s not an easy choice – select the right one and all will be well and you’ll sink into a comfy chair and only leave it to make large steaming mugs of tea. But make the wrong choice and you’ll end up scratching around starting things and then dumping them after a few pages.

This year I got it spot on with John Dunning’s second Cliff Janeway biblio-detective story, The Bookman’s Wake. The first in this series which I read quite a long time ago, Booked To Die, established the character of Janeway as a top-rate but disillusioned Denver-based cop who has left the force to dedicate himself to his real love – books. He may of thought that opening his own second-hand bookshop and getting to grips with the finer points of collectible books would be excitement enough but seemingly inevitably he attracts mystery and crime like flowers attract bees.

I’m not usually a big fan of crime fiction because I find the conventions that operate in that world are often a substitute for skillful writing and inventive plotting and this means that the high quality crime novels tend to be few and far between. I think Dunning’s writing is really very good but to be honest it’s the fact that there’s a pretty big dose of book-related content that kept me interested. Dunning tends to weave real, substantial book trade information into his stories and he doesn't let the crime element completely overpower the content of interest to bibliophiles.

Another reason I find detective fiction is often hard going is the plethora of fundamentally absurd plots and the level of suspension of disbelief that’s required in order to build jeopardy and justify the extraordinary carnage that often takes place. And in truth this is also a criticism that could be made of The Bookman’s Wake which requires you to accept that over half a dozen murders and several attempted ones could be caused by a crazed attachment to a single rare book.

Reviewing detective novels always raises the problem of unintended spoilers and with this book it’s virtually impossible to tell you much about the plot that isn’t a spoiler. Suffice it to know that Janeway is enticed to act as a bail-bondsman to escort a young woman called Eleanor Rigby to court in order that she should stand trial for the attempted theft of a very rare copy of Edgar Allan Poe’s The Raven. This is an edition produced in the Sixties by two brothers who set up their own, now very collectible, art book design imprint.

Needless to say, nothing is quite what it seems and there are lies and treachery at every turn; Janeway must call on all his knowledge as a book dealer and all his grit and experience as a former policeman as the story takes one improbable turn after another.

What was most pleasing about the book was that Dunning keeps his writing knowingly smart – even when he does resort to stereotypes or even detective fiction cliché, he does so in a thoughtful and conscious way that seems to invite the reader to become complicit in the storytelling. It’s almost as if he’s whispering in your ear, ‘I know this story is absurd but just trust me and go with it – anyway you really care about Janeway don’t you..’

There is also space for a degree of genuine reflection within the story and there is some commentary of human nature that he shares without ostentation. I liked this observation in particular when Janeway is considering the housing conditions that a young mother is forced to live in:

It made me remember myself as a kid, bouncing around for a year of my life in places not much better than this….It’s a chilly reminder of what life hands out to those who slip and can’t climb up again. The young seem unbothered by the lack of elegance: time, they believe, will see them through it…The young endure and hope, until suddenly they’re forty and time isn’t what it once was. The old suffer and save their hopes for the real things in life – a high, dry present and a quiet place to die.

There are another three books in the series of five and it seems unlikely Dunning will be adding to this number any time soon. It’s a series you can read confident that its substantial stuff that will also keep you riveted. A great Christmas Day read and probably just as good at any other time of the year.