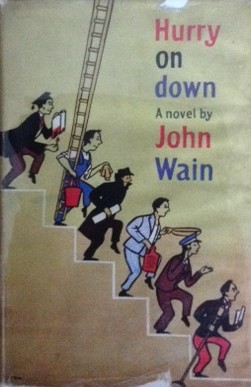 Hurry On Down by John Wain

You’ve got to feel sorry for poor old John Wain. His reputation as a writer has metaphorically slipped down the back of the literary world’s sofa and when people do remember him it’s always in the context of the Angry Young Men of the 1950s. Wain himself always rejected that label and to be honest it’s hard not to sympathize because he’s got very little in common with the likes of John Osborne. What seems to have happened is that critics have perceived similarities between Wain’s first novel, Hurry On Down, and that other supposed Angry Young Man, Kingsley Amis’s breakthrough book, Lucky Jim. But, rereading Wain’s novel for the first time in over 30 years, I think the links between the two are entirely superficial.

What Wain and Amis do share in common is a new sense of iconoclasm towards established social structures. Published in 1953 Hurry On Down  introduces us to a very different kind of literary creation – the young university educated man who doesn’t want to fit in, who rejects suburbia and the mores of his parents and wider society and who goes on a quest for a new kind of life and love but finds that ultimately he is at the mercy of the situations he finds himself in. Forget university, the real world becomes his real source of education. What Wain has done here is to reimagine the old 18th century picaresque adventure novel – the book is infused with the spirit of Defoe, Smollett and Fielding transported into post-war Britain where his protagonist wears lounge suits, works as a window cleaner and gets involved in drug running.

Charles Lumsley looks like he’s heading out of university into a ready-made career courtesy of his putative father-in-law and into passionless marriage with his docile long-term girlfriend. But his soul revolts against the prospect and he walks out on this future – subsequently falling into a series of jobs that lead him into various scrapes and extraordinary relationships. Charles follows his nose and learns life’s lessons the hard way as a window cleaner, a car export driver and drug smuggler, hospital porter, chauffer and ultimately a comedy script writer. Each episode is a small black comedy all of its own and unlike the pratfall slapstick of Lucky Jim the humour is more subtle, more language-based and distinctly more edgy.

Charles is not painted as wholly good or wholly bad – he’s essentially a modern everyman, a Tom Jones without the brio or sexual athleticism. Charles isn’t looking for love but it does find him in the form of the sophisticated and stunning Veronica and her presence haunts him throughout the book. Ultimately there will be no resolution of the relationship until Charles has completed his rather chaotic journey of self-discovery.

As I suggested at the outset of this piece, Wain gets too little acknowledgement for the contribution he made to helping define what it was possible to do in the British post-war novel – eclipsed as he so often is by Amis and also hobbled by the lazy association with the Angry Young Man phenomenon that is so often ascribed to him. I think it’s fair to say that Hurry On Down does feel a bit dated now and quite a lot of the action describes a revolt against conventions we left behind some time ago. However, it’s still well worth a read because the freshness that produced the book still blows through it.